Nick Jonas SECRETLY Captures Priyanka Chopra's Reactions While Watching 'Elf' and the Video is Too Cute for Words! 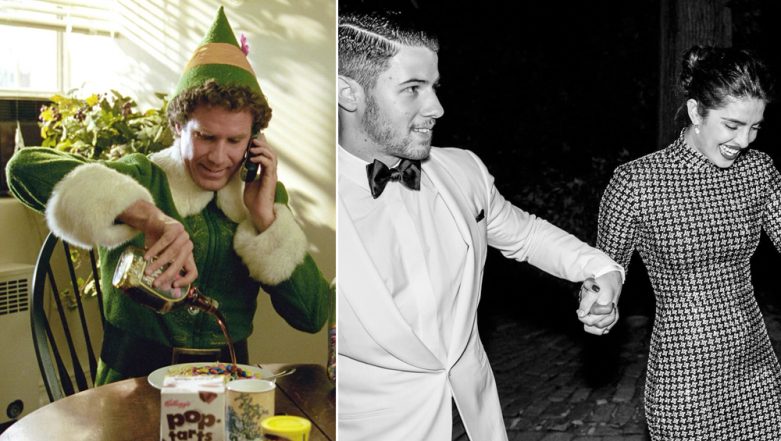 Priyanka Chopra and Nick Jonas are in their own paradise right now! After their extravagant wedding in Jodhpur's Umaid Bhavan, the newlyweds are having the best time of their life right now. The couple recently was spotted watching a film together in a private theatre. Well, this was not any new release but a 2003 American Christmas fantasy comedy film named Elf. Probably PC was watching this flick for the first time and Nick secretly captured her reactions in a video. Confirmed! Priyanka Chopra and Nick Jonas' Mumbai Reception to Be Held on December 20 and Other Inside Details.

In this grainy and blur video, we can see Nick in a goofy mood, secretly trying to show the fans PC's expressions while watching the movie. He also showed the fans a glimpse from the movie too. Check out this cheesy but cute video right here!

After their huge and lavish wedding, the couple hosted a reception in New Delhi. It was attended by the family and friends of the actress. But it was Prime Minister Narendra Modi's presence and the pictures from the reception that broke the internet. Now after this grand event, the couple will host one more reception in Mumbai where they will invite PC's colleagues from the Bollywood world. On the work front, Priyanka will be next seen in Shonali Bose directed film The Sky Is Pink that also stars Farhan Akhtar and Zaira Wasim in the lead.