No Time To Die: Léa Seydoux Opens Up About Her Role in Daniel Craig Starrer, Says ‘Romance Plays a Key Role in the Movie’ 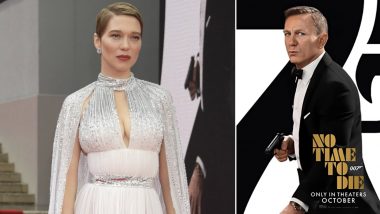 Actress Lea Seydoux, who plays Dr. Madeleine Swann, the love interest of the suave spy James Bond in the upcoming film No Time To Die, has shared that romance plays a key role in the movie. Seydoux told the I newspaper: "It's much more emotional this time. And it's the love story with James Bond that is in the centre of the film." No Time To Die Review: Daniel Craig’s James Bond Movie Is ‘Startling, Exotically Self-Aware, Funny’, Say Critics.

She also praised Daniel Craig for adding more depth to the famous character and creating "empathy" for Bond by removing the misogyny associated with the spy, reports femalefirst.co.uk. Seydoux said: "It's also because Daniel created a character with more depth, as well... He changed the part of James Bond. I think he managed to create more empathy with his character. Now: Bond is not what he used to be like: a misogynist." No Time To Die Movie: Review, Cast, Plot, Trailer, Release Date – All You Need To Know About Daniel Craig’s Latest James Bond Film.

Cary Joji Fukunaga has directed the movie after original director Danny Boyle left due to creative differences and the American filmmaker said that he had little time to think while working on the film.

(The above story first appeared on LatestLY on Sep 29, 2021 02:05 PM IST. For more news and updates on politics, world, sports, entertainment and lifestyle, log on to our website latestly.com).