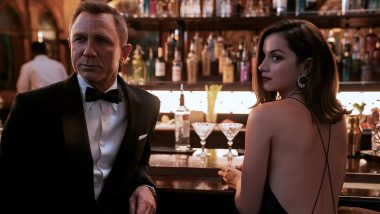 No Time To Die is the 25th official Bond film and Daniel Craig's final and fifth movie of the franchise. As this is going to be Craig's last Bond film, the audience is more than excited to see the actor in the iconic role for one last time. Produced by Eon Productions, the poster, trailer, teaser of the movie grabbed a lot of attention and so fans are waiting with bated breath for the film to release in the theatres. A few critics got to see the film before it reached the cinema halls, and it comes as no surprise that they are impressed by what they got to see. No Time To Die Movie: Review, Cast, Plot, Trailer, Release Date – All You Need To Know About Daniel Craig’s Latest James Bond Film.

Let's Check Out What Critics Have To Say About The Film:

The Guardian:  "No Time To Die is startling, exotically self-aware, funny and confident, and perhaps most of all it is big: big action, big laughs, big stunts and however digitally it may have been contrived, and however wildly far-fetched, No Time To Die looks like it is taking place in the real world, a huge wide-open space that we’re all longing for. The big finish shows that the 007 franchise template is still capable of springing a surprise on the fanbase – and it could be that the world of Bond has taken something from the Marvel and DC universes, with their own sense of cartoonish grandeur and mystery."

BBC: "No Time To Die does exactly what it was intended to do, which is to round off the Craig era with tremendous ambition and aplomb. Beyond that, it somehow succeeds in taking something from every single other Bond film, and sticking them all together. To quote a certain song that makes a wistful reappearance: if that's all we have, we need nothing more."

Vulture: "Director Cary Joji Fukunaga has not just a terrific eye, but also an intuitive knowledge of where to put the camera for maximum impact — whether it’s inside a bulletproof car that’s being strafed by what feels like a hundred gunmen, or a bird’s-eye-view of Ana de Armas (playing a novice CIA agent, a brief highlight of the movie) spinning around in a high-slit gown knocking down baddies, or a handheld long-take following Bond up a stairwell as he pummels his way through a small army of henchmen, or simply a soaring aerial shot taking in the dizzying heights of an Italian mountain town. Shot partly on IMAX, No Time to Die is clearly meant to be seen on a massive screen."

Time Magazine: "No Time to Die, its flaws notwithstanding, is perfectly tailored to the actor who is, to me, the best Bond of all. With his fifth movie as 007, Craig is so extraordinary he leaves only scorched earth behind. There will be other Bonds for those who want them. For everyone else, there’s Craig."

The Hollywood Reporter: "The 25th installment in the venerable 007 series is the first to be directed by an American, Cary Joji Fukunaga, who handles the action with assurance and the more intimate interludes with sensitivity, never forgetting that there’s a wounded, vulnerable human being beneath the licensed-to-kill MI6 agent. The uneven movie’s big issue, however, is that the path to Craig’s momentous departure is drowning in plot; it’s so convoluted and protracted you might find yourself zoning out through much of the villainy."

No Time to Die premieres in Indian theatres on Thursday (September 30).  Apart from India, Argentina, Austria, Brazil, Denmark, Finland are also among some other countries that will see the movie on September 30 too. The new Bond film will release in US and Canada on October 8. And, the movie will premiere at the Zurich Film Festival in Switzerland and in the UK on September 28.

(The above story first appeared on LatestLY on Sep 29, 2021 11:18 AM IST. For more news and updates on politics, world, sports, entertainment and lifestyle, log on to our website latestly.com).