Pamela Anderson Birthday: These GIFs of the Baywatch Actress Are Red Hot 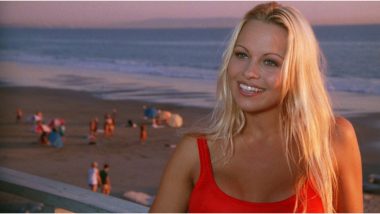 Pamela Anderson turns 53 today. The actress shot to global fame with her stint on the TV show, Baywatch. Her run on the beach as a lifeguard wearing a red swimsuit remains as one of the most iconic TV moments ever. In a recent interview, she has revealed that she still has one of the red swimsuits with her. She keeps it in her top drawer and wears it time to time to entertain friends, also giving them mouth to mouth. Pamela is no less than an enigma.

It is not just her lavish, sexy lifestyle that has helped her become so iconic. She has talked about being a sexual abuse survivor. She has written to Donald Trump to pardon Julian Assange. She is also an animal rights activist. Let us not forget, that she has also been a guest on one of the seasons of Bigg Boss. Okay, maybe we can forget the last one. Pamela Anderson Birthday Special: Here are Some Lesser Known Facts About the Baywatch Star.

But what we cannot forget at any cost is the numerous iconic TV moments that the Baywatch actress has given us in the '90s. On her birthday, let's look at some of the moments of Pamela Anderson.

What A Beauty... Even When She's Smirking

And Of Course, The Running

And EVEN MORE RUNNING

And This Priceless Posing

Pamela reprised her role for a blink and miss cameo in the movie adaptation of Baywatch, which featured Dwayne Johnson, Zac Efron, Priyanka Chopra. Pamela has later admitted that she did not like the film. Well, here's to hoping that we will get to see more of Pamela as the honourable CJ Parker in some other project in the future that will be more committed to the source material. Cheers.

(The above story first appeared on LatestLY on Jul 01, 2020 09:40 AM IST. For more news and updates on politics, world, sports, entertainment and lifestyle, log on to our website latestly.com).