Priyanka Chopra has posted a picture of Joe Jonas and Sophie Turner to congratulate them for their wedding. She wrote a very sweet caption along with it. Sophie and Joe left heart emoji as replies in the comments section. 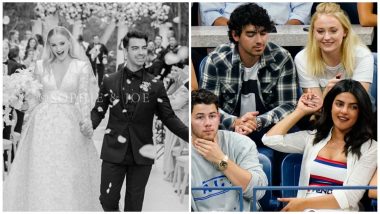 Sophie Turner and Joe Jonas got married on June 30 in France. This one was a more traditional wedding for the two than the LA wedding that took place weeks ago. Sophie's sister-in-law Priyanka Chopra took to her Instagram page to wish the happy couple. Looks like a bit late but we don't know the reason and Sophie-Joe only posted this pic two days back. Priyanka shared a pic of the happy couple walking down the aisle after getting married. She wrote in the caption, "Truly the happiest people I know. May life be everything you want it to be. Congratulations Mr and Mrs Jonas,"

Sophie and Joe have been extremely welcoming of Priyanka when she started dating Nick Jonas. When Nicyanka decided to get married, Sophie and Joe were totally game for it, despite their own wedding being close. Both Joe and Sophie had lashed out at a publication after they wrote a scathing article against PeeCee. Here's What Sophie Turner Has To Say About Priyanka Chopra And Nick Jonas Tying The Knot Before Her And Joe Jonas.

Truly the happiest people I know. May life be everything you want it to be. Congratulations Mr and Mrs Jonas. ❤️🙌🏽

Sophie and Joe lefts heart emoji as reactions in the comments section. Expect more of these cheesy and mushy posts coming from the Jonas family in the future. This is one celebrity family that likes to hang out together a lot. We love their vacation pictures. The entire family starred together in Jonas Brothers' comeback music video, Sucker, which went on to become a chart-topper.

(The above story first appeared on LatestLY on Jul 06, 2019 10:46 PM IST. For more news and updates on politics, world, sports, entertainment and lifestyle, log on to our website latestly.com).