The 75-year-old singer has two sons Zachary (11) and Elijah (9), with his husband David Furnish, and Elton has promised to support his kids in whatever careers they choose, reports Female First UK. 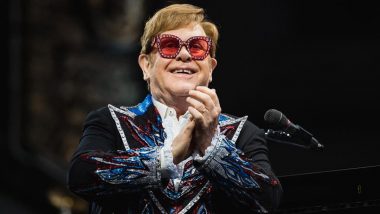 British singer-composer Sir Elton John has vowed to support his sons if they follow him into the music industry. The 75-year-old singer has two sons Zachary (11) and Elijah (9), with his husband David Furnish, and Elton has promised to support his kids in whatever careers they choose, reports Female First UK. He told E! News: "They are still so young, so not entirely sure [what they want to do]. But of course, whatever their dreams and ambitions are, my husband David and I will fully support them." Elton John’s Disney+ Concert Erroneously Mentions ‘Donald Trump’ in Its Closed Captions (View Pic).

Sir Elton recently finished the American leg of his Farewell Yellow Brick Road tour, and he's now looking forward to spending more time with his kids. He said, quoted by Female First UK: "I am of course looking forward to spending more time with my sons. I am also looking forward to being able to dedicate more of my time to other projects, like the Elton John AIDS Foundation." Earlier this year, Sir Elton revealed that he was stopped from adopting a Ukrainian orphan because of his sexuality. The award-winning star and his husband tried to adopt a child from an orphanage that they visited. Tom Hardy Was Attached to Play Elton John in ‘Rocketman,’ but After the Film Got Stuck in … – Latest Tweet by Film Updates.

The 'Rocket Man' hitmaker said: "I was carrying this little boy around for hours. We had a press conference at the end and they said 'You seem very fond of this little boy. Would you think of adopting him?' and I went 'I'd actually love to!' Of course, not thinking about social media, it went around the world straight away. It was 'Elton John wants to adopt two children'." And ultimately, Elton and David weren't allowed to adopt the boy. He said: "Because I was gay I wasn't allowed to anyway.

(The above story first appeared on LatestLY on Nov 27, 2022 01:41 PM IST. For more news and updates on politics, world, sports, entertainment and lifestyle, log on to our website latestly.com).