Since the release of the movie, neither actor has commented on their involvement in the film until now. Andrew Garfield sat down in an interview with Variety where he got candid about his involvement in Spider-Man: No Way Home. 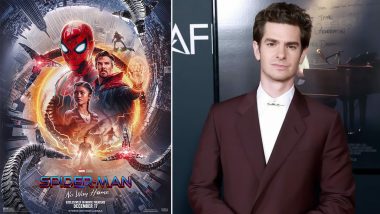 Andrew Garfield on His Involvement in Spider-Man: No Way Home (Photo Credit: Instagram)

Last year Spider-Man fans around the world cheered in unison as their favourite wallcrawler just had one of his best live action outings yet. Spider-Man: No Way Home follows Tom Holland’s Peter Parker after he has his identity exposed. Enlisting the help of Doctor Strange to clear off his name, the spell to do that goes wrong and we have a mess of multiversal proportions on our hands. The movie unites all the Spider-Man movie franchises under one banner and sees the return of many legacy villains like Willem Dafoe’s Green Goblin and Alfred Molina’s Doc Ock. Spider-Man No Way Home Movie Review: Tom Holland’s Marvel Film Is a Multiversal Celebration of the Iconic Avenger! (LatestLY Exclusive).

But it wasn’t just the villain show with Spider-Man: No Way Home. In what’s perhaps one of the biggest crossovers in Marvel films, we saw the return of Tobey Maguire and Andrew Garfield in Spider-Man: No Way Home too. The previous two web slingers returned in spectacular fashion as they made a great impact and made most of their screen time. It honestly was like watching your childhood come back to life.

Sitting down with Variety, Garfield would talk about how Marvel approached him for the role and how he never thought he would be back in the suit again because he just wanted to be a fan. But it was the idea of being on screen with the other two Spider-Men and just the image of it sold him on the film.

He talked about how he and Tobey were on set for two weeks and shot most of their stuff in that time. Him and the other two Spider-Men in costume had him considerably geeking out and just being excited for what was about to come. All the three actors talked about their experiences with the character and had a feeling of being an elder brother, middle brother and the younger brother.

While this all sounded unbelievably exciting to Garfield, what ultimately sold him on the movie was saving Zendaya’s MJ. In a way he believes that was a redemption moment for Peter Parker and how it was an important moment. Spider-Man No Way Home: Tom Holland’s MCU Film To Have Its Digital Premiere on February 28 – Reports.

The article aside from even the Spider-Man talk is a great read. It has Garfield talking about his experiences with being in a musical and just how he would like to flex more of his singing skills. But for the Spidey fanatics, this is a great read.

Spider-Man: No Way Home is playing in theatres right now.

(The above story first appeared on LatestLY on Jan 11, 2022 08:54 PM IST. For more news and updates on politics, world, sports, entertainment and lifestyle, log on to our website latestly.com).