The Batman Trivia: Matt Reeves Reveals How They Kept the Ending Cameo a Secret; Talks More About the Surprise Character! (SPOILER ALERT)

While The Batman does end on a very hopeful note, but it features one final stinger at the end that will have any Batman fan giddy with excitement. 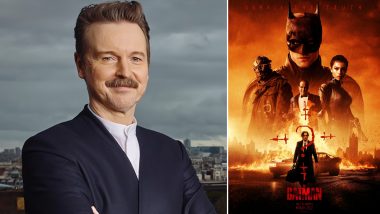 The Batman is finally out and has been the talk of everyone’s mouth. Robert Pattinson stars as everyone’s favourite Caped Crusader. In his second year of crime fighting, Batman faces off against Riddler who is going around murdering corrupt city officials. The movie is a love letter to the character and it really dives deep into what makes Batman so special. The Batman Movie Review: Matt Reeves & Robert Pattinson Deliver the Definitive Version of DC’s Dark Knight! (LatestLY Exclusive).

While The Batman does end on a very hopeful note, it features one final stinger at the end that will have any Batman fan giddy with excitement. A fair warning, spoilers will be mentioned going forward.

The ending of The Batman sees Riddler being locked up in Arkham, crying that his plan was thwarted off by Batman. But just next to his cell, a voice appears trying to console him. The voice belongs to no one other than Batman’s arch nemesis, the Joker, played by Barry Keoghan. The final scene sees Joker manipulating Riddler into being friends with him.

The character’s name outright isn’t said, but recently sitting down with IGN, director Matt Reeves confirmed that it was Joker after all. He dives deep into the Joker’s looks and why he is the way he is.

Matt Reeves reveals that this rendition of the Joker has had his facial scars since birth. He didn’t want to retread Nolan’s version of the character or have him fall in a vat of chemicals. Reeves also revealed that this Joker isn’t exactly the Joker yet, rather he will be developed, but don’t expect him to show up in the sequels.  He also talks about a deleted scene where Batman needs to profile the Riddler and tries enlisting Joker’s help.

Reeves further revealed that the character is manipulative in nature. His entire life has been a cruel joke to him, and his response to it is by committing these acts and being manipulative towards people.

While of course, rumblings of the Joker appearing in The Batman had been there since the beginning, it was still impressive that they managed to keep it a secret. The way they did that is also more impressive considering how plot points leak nowadays.

When the casting for the movie was announced, Barry Keoghan was confirmed to be playing a cop named Stanley Merkel (which translates to S Merkel, I see what you did there Reeves). So this further helped keeping the chance of leaks to minimum. Apparently alternate scenes with Keoghan playing Stanley Merkel were also shot. The Batman Ending Explained: Decoding the Climax to Robert Pattinson’s DC Movie and the Secret Cameo! (SPOILER ALERT).

All in all, we can say that this effort was very much worth it. The Batman directed by Matt Reeves is playing in cinemas right now.

(The above story first appeared on LatestLY on Mar 07, 2022 06:31 PM IST. For more news and updates on politics, world, sports, entertainment and lifestyle, log on to our website latestly.com).