From Ben Affleck and Michael Keaton returning as Batman to Sasha Calle in the role of Supergirl, The Flash is going to be one big superhero fest. The Flash directed by Andy Muschietti is scheduled to release on November 4, 2022. 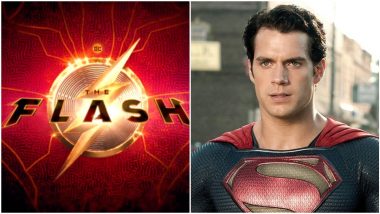 Like Spider-Man: No Way Home, DC’s The Flash has had a myriad of leaks. This new leak comes from the twitter user crypt0dad_ who now in a deleted thread of tweets said that he worked on The Flash’s sets and dished out some details. He leaked what Barry Allen’s new Flash suit will look like and hinted at a Superman cameo. If lucky, you can check out the photo of the suit in a Reddit post because Warner Brothers has been taking down photos of it due to a strict DMCA policy. The Flash: 5 Details We Learnt From the New Leaked BTS Stills of Ezra Miller’s Upcoming DC Movie!

The suit at first glance looks to be more comic accurate than the suit that Ezra Miller donned in Justice League and 2016's Suicide Squad. It looks more comic accurate and feels more like a suit rather than something that’s been 3D printed by a tech genius in his garage. Although the proportions of the suit looks quite weird, many are speculating that it’s a stunt double rather than Ezra himself in the suit.

Previously there were rumours about the Flash suit being completely CGI when Ezra was spotted wearing a motion capture suit. Those worries can be set to rest with this photo. The Flash: Set Leaks Confirm That Ben Affleck Will Suit Up As Batman and Flaunt His New Ride.

Coming onto the Superman cameo, the user even said that he had spotted an actor playing the Man of Steel on the set. He would later further clarify his claims in a now deleted tweet that it was none other than Henry Cavill in the suit. You can check out the tweet in a Reddit post.

While we are not sure how credible the information is, people who are expecting to see Cavill don the suit again can rest with ease.

At this point it’s safe to assume that The Flash is shaping up to be something special and that DC fans are in for a treat. From Ben Affleck and Michael Keaton returning as Batman to Sasha Calle in the role of Supergirl, The Flash is going to be one big superhero fest. The Flash directed by Andy Muschietti is scheduled to release on November 4, 2022.

(The above story first appeared on LatestLY on Aug 03, 2021 09:11 PM IST. For more news and updates on politics, world, sports, entertainment and lifestyle, log on to our website latestly.com).