The Queen's Gambit Becomes Netflix's Biggest Scripted Limited Series Ever; Leads To Increased Google Search On 'How To Play Chess'

Chess becomes extremely popular on Google thanks to The Queen's Gambit. It not just becomes the biggest scripted miniseries for Netflix but has given a surge of searches on how to play chess. 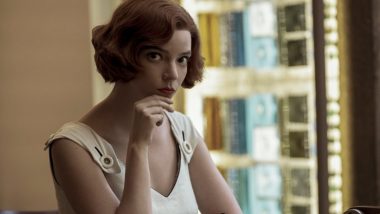 Recently, we told you how Kareena Kapoor Khan has watched The Queen's Gambit and wishes to know if India can make something like that. Well, we don't about that but it seems the miniseries has definitely taken the OTT content world by storm. The series has become the biggest scripted limited series for Netflix ever. That's not all. All the frenzy and glorious reviews for the show have helped the novel it is based on be part of the New York Times' Best Seller's list, 37 years after it was published. Kareena Kapoor Khan Watches The Queen’s Gambit And Wants To Know ‘Can Someone Please Make This Here?’

The Queen's Gambit is about Chess prodigy Beth who's difficult life in an orphanage becomes the biggest roadblock in her soaring fame as a chess player. The series is deeply satisfying as it flaunts everything a teenager goes through. It also reminds us of Anne With An E who had a similar upbringing but found a way to fight the darkness and torture in her life.

Now everyone wants to be a Chess player:

♕ The novel has entered The New York Times bestseller list, 37 years after its release

We don't know if learning Chess from Google is a great idea but we are damn stoked that a series has made people take up an intelligent sport.

(The above story first appeared on LatestLY on Nov 24, 2020 01:50 PM IST. For more news and updates on politics, world, sports, entertainment and lifestyle, log on to our website latestly.com).