The Tomorrow War Movie Review: Chris Pratt’s Sci-Fi Actioner Has a Solid Concept but Is Let Down by an Inconsistent Script (LatestLY Exclusive)

The future part of The Tomorrow War, what the film is about, just becomes rather a vessel for the plot to showcase a destroyed future. It rather acts as a backdrop which just makes the first hour and a half of the film look completely different. Read on. 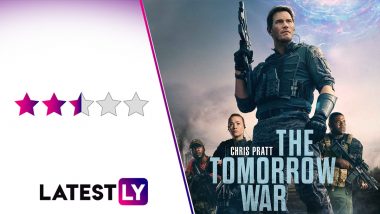 The Tomorrow War Movie Review: The Tomorrow War is directed by Chris McKay which marks his first live-action directorial and stars Chris Pratt, Yvonne Strahovski, JK Simmons, and Betty Gilpin. The Tomorrow War focuses on time travelers arriving from 2051 to deliver an urgent message where 30 years in the future, humankind is losing a war to aliens, and their only hope is for humans to be transported from the past to aid them in the future. In itself, this time travelling concept is quite solid as it has a lot of potential, and while The Tomorrow War reaches certain highs, it falters when it runs into the clichés that have marred this genre for a while. Sweet Tooth Review: DC’s Netflix Series Is a Sweet, Hopeful Journey Through a Dystopian World (LatestLY Exclusive).

In a way The Tomorrow War rather has a really interesting first half. While it does rush to get into the action right from the word go, it still sets up its plot rather really well. The stakes are laid out, character relations are established. It feels like the plot is going in a certain direction which while feels quite similar to other action films, it never really falls into the realm of generic. Some of the character drama also works really well, especially the dynamic between Dan Forester (Chris Pratt), and his daughter in the future, Muri Forester(Yvonne Strahovski). For the first half of the film, it's these two characters that the plot spends the most time developing, and most of it really works here. Seeing as there are two versions of Muri Forester in the film, it helps Dan with his character development because it gives his character a viable and important role going forward in the plot.

Some of the action, while not great, is still serviceable enough to keep you interested in The Tomorrow War. One of the biggest compliments that I can give The Tomorrow War is that it never leaves you bored, it has your attention throughout its two hours runtime. The action is serviceable, the effects are good, the set pieces are entertaining, and coupled with a bit of decent cinematography it wraps itself as an entertaining package altogether. Dom Review: A Tonally Inconsistent But Entertaining Saga About the Brazilian Favela (LatestLY Exclusive).

But that's the first half...

Now while the first half of the film is great at capturing some of the potential of its concept, the second half of the film just goes in a completely different direction. The future part of The Tomorrow War, what the film is about, just becomes rather a vessel for the plot to showcase a destroyed future. It rather acts as a backdrop which just makes the first hour and a half of the film look completely different. A lot of this can be traced to how packed the plot can end up feeling and the pacing of it all, it’s like watching an entire season of television be condensed into two hours.

This leads to the side characters just being there as it strives for a group dynamic that you would expect from an Alien movie, but the development just isn’t there. Characters show up when it feels convenient to the plot and then just vanish away until they are needed again. Had there been more time, or rather had the first half been its own film with the second half being fleshed out more in a sequel, the plot would have been effective. It’s the feeling of such contrasting halves of a film that let down rather an interesting concept.

The Tomorrow War also tries to bring in some issues regarding how war affects people and tries talking about PTSD, but these points just feel touched upon. It’s like The Tomorrow War wants to talk about social causes, but then comes an explosion to showcase how cool the visuals are. Even the alien designs feel uninspired, if you have seen any alien invasion-type film in the last decade, especially Edge of Tomorrow, then in a way it’s almost a very similar design. They look like grey creatures with the face of every other alien in any movie ever. Nomadland Movie Review: Frances McDormand’s Oscar-Nominated Drama Is Definitely a Trip Worth Sitting Through! (LatestLY Exclusive).

-Chemistry between Pratt and Strahovski

- Good setup for the first half

-Tries to touch on social causes but never really embraces it

The Tomorrow War does have the makings of a solid action film, but it doesn’t let its plot breathe enough to fully capture the gold it’s looking for. While Chris McKay does direct the scenes well and Chris Pratt is able to make the story a bit grounded, the pacing just disservices the movie so much that it would have been better had this story been split up into two movies. The Tomorrow War is streaming now on Amazon Prime Video.

(The above story first appeared on LatestLY on Jul 02, 2021 12:36 AM IST. For more news and updates on politics, world, sports, entertainment and lifestyle, log on to our website latestly.com).