What Was Pamela Anderson and Tommy Lee's Sex Tape Scandal? From Stolen Honeymoon Video to Lawsuit, Here's Everything About The Infamous Incident Set to Be Adapted Into TV Series 'Pam and Tommy'

The biggest sex scandal happened in the 90s when Pamela Anderson and Tommy Lee made it to the front page of tabloids for their sex tape. The scandal became the talk of the town to an extent that a series on the sex scandal is now in the pipeline. 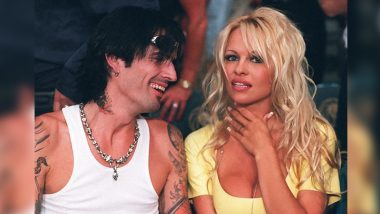 The 90s were the golden days when people got to see the hot Pamela Anderson running on the beach in a sexy red swimsuit in Baywatch. The actress was an inspiration for billions of people in the world, so much that she was able to capture Tommy Lee's heart as well. Tommy Lee was living a fantasy life, he had sold 20 million records by the age of 32 and had Pamela by his side. The two got married in a jiffy only after knowing each other for 96 hours and what happened next is history. Pamela Anderson and Tommy Lee’s Sex Tape Scandal To Be Adapted Into a TV Series; Likely to Star Seth Rogen, Lily James, Sebastian Stan.

The biggest sex scandal happened in the 90s when Pamela Anderson and Tommy Lee made it to the front page of tabloids for their sex tape. The scandal became the talk of the town to an extent that a series on the sex scandal is now in the pipeline. Seth Rogen in collaboration with Disney's Hulu is all set to showcase the story behind Pamela and Lee's sex tape which goes by the working title 'Pam and Tommy'. Lily James and Sebastian Stan have reportedly been roped as the leads for the show as well. The series is still in its pre-production phase so we thought we would take you down the memory lane and give you a recap of what all happened back then.

Tommy Lee and Pamela Anderson's sex tape that they recorded during their honeymoon was leaked by a person name Rand Gauthier.  He was working for the stars at their Malibu mansion and stole the tape to teach them a lesson. The moment the tape was leaked on the internet, it was everything people were talking about. Pamela Anderson And Jon Peters Split After 12 Days Of Marriage.

The Reason For The Revenge:

Tommy Lee and Pamela Anderson abruptly fired a handful of the people renovating their Malibu mansion and refused to pay them. Electrician Rand Gauthier was one of the staff working there. He came to pick up his tools from Tommy's house after being kicked out. Tommy Lee pointed a shotgun at them, saying, “Get the fuck off my property,” This did not go very well with Rand and he decided to teach the drummer a lesson. He decided to steal the giant safe that had all of Lee’s guns and Anderson’s jewellery to make the musician shallow. Little did he know that the safe also contained the scandalous homemade sex tape. Rand decided to leak it and make money off of it.

Starting in the spring of 1996, everyone wanted to see what was on the tape. The couple already had a reputation for using drugs, but with the sex tape out, it gave them an image which was an entirely new level of dirty. It took two years for the tape go from bootleg to viral. At one point it made an estimated $77 million in less than 12 months. Pamela Anderson Gives Her Friends Mouth To Mouth in Her Old Baywatch Red Swimsuit Just 'To Be Funny' And Your BFF Won't Even Return Your Texts on Time.

How Did Gauthier Do It?

Gauthier revealed in an interview that he spent an entire summer preparing for the heist. His plan was to cover himself in a white Tibetan yak fur rug that looked like Tommy's dog and crawl to the garage and steal the tape. About five days before Halloween in October, Gauthier decided to make his move and did something very impossible for Tommy Lee to comprehend.

Rand found family photographs, a Rolex, a gold-and-diamond Cartier watch, gold-and-emerald cufflinks, a ruby-and-diamond cross, the white bikini that Anderson wore to their beach wedding, and a Hi8 tape and the infamous. According to Gauthier, a wealthy foreigner offered him a million dollars for the tape, but he felt it was worth many times that amount and sold it to Louis “Butchie” Peraino. Many were after the tape including Penthouse who had acquired a copy.

On March 29th, 1996, Pamela and Tomy filed a $10 million civil lawsuit against everyone they thought might have a copy, including Penthouse, Ingley, Gauthier, Tompkins, Sardell and Swing. Anderson and Lee also requested a temporary restraining order against Penthouse which was denied. Penthouse went on to publish the story. Finally, the court issued an injunction against Rand and team in early October of 1997, ordering them to stop copying and selling the tape.

However, Rand was no more making copies and selling them, the copies of the tape were procured by many. Tommy and Pamela were exhausted of the never-ending series of depositions and failed to stop the tape’s distribution and decided to settle with it. They reportedly sold it to Seth Warshavsky, owner of an online adult website. However, Anderson and Lee have both publicly denied profiting off the tape.

(The above story first appeared on LatestLY on Dec 17, 2020 04:57 PM IST. For more news and updates on politics, world, sports, entertainment and lifestyle, log on to our website latestly.com).