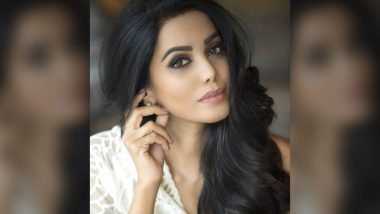 There are several celebs from the entertainment industry and personalities from other fields who have been tested positive for coronavirus. Despite taking maximum safety measures, many have been affected by this deadly virus. Natasha Suri, former Miss India World and actress, has also been tested positive for COVID-19. The 31-year-old diva confirmed about the same to a leading daily. Singer SP Balasubrahmanyam Tests Positive for Coronavirus.

Natasha Suri, in an interview with Bombay Times, confirmed that she has been tested positive for coronavirus. Natasha, who is currently under home quarantine, stated about the symptoms that she faced. She was quoted as saying, “Around six days ago, I had gone to Pune for some urgent work. After I came back, I fell ill and had fever, sore throat and weakness. I underwent a test three days ago, which came positive. Currently, I am in home quarantine. I still have fever and weakness. I am on medication and also taking immunity boosters. I live with my grandmother and sister, so I will get them tested, too.” Dangerous Trailer: Bipasha Basu and Karan Singh Grover Team Up for an Edgy Thriller (Watch Video).

Natasha Suri’s upcoming project is the web series titled Dangerous for MX Player, in which Bipasha Basu and Karan Singh Grover will be seen in the lead. This series is all set to be premiered from August 14 and Natasha has confirmed that she would be not be going for the promotional activities, which will start from August 10, owing to her health condition. The earlier projects done by Natasha are King Liar (Malayalam movie) and she was also seen in the series Inside Edge.

(The above story first appeared on LatestLY on Aug 09, 2020 10:41 AM IST. For more news and updates on politics, world, sports, entertainment and lifestyle, log on to our website latestly.com).