The singer recently took to Facebook to confirm the same and mentioned that he's showing mild symptoms for the virus. The singer in his video asked people to not worry about his health. 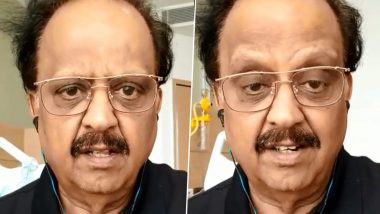 With rising number of coronavirus across the country, we are now hearing about several Indian celebrities too becoming victims of the novel virus. In the past week, we have heard of a number of South celebs contracting the virus and latest news is that veteran singer SP Balasubrahmanyam has also been tested positive for the same. The singer recently took to Facebook to confirm the same and mentioned that he's showing mild symptoms for the virus. The singer in his video asked people to not worry about his health. S Janaki Death Hoax: SP Balasubrahmanyam Confirms The Veteran Singer Is Fine, Requests Netizens To Not Spread Rumours About Her Health.

Taking to Facebook, the famed singer stated that he has been hospitalised in an isolation ward and despite the doctors recommending him home quarantine, he has moved himself to an isolation ward to keep his family safe. The singer revealed a few symptoms that he has been showing and said, "Last two to three days I have been having a little discomfort. Discomfort means little chest congestion, which for a singer is nonsense. Phlegm forming and then cold and on and off fever. These three things, otherwise no problem. But I didn't want to take it easy, so I went to the hospital and checked. So they said it was just a mild, mild, mild, very mild positive of corona."

The singer though in his video has repeatedly mentioned asking fans and the media to stay calm not call him to get his health update. He said, "Lot of people have been calling me. I couldn't attend all the calls. I have come here mostly to take rest so there won't be any disturbance to me and to take medication. Don't bother calling me. I am fine, I will be fine."SP Balasubrahmanyam: Dil Deewana, Telusa Manasa - 5 Chartbuster Melodies Sung By The Legendary That Have Become Classics!

SP Balasubrahmanyam has been one of the most respected and loved singers in Bollywood as well as the South. He has crooned some iconic tracks including the likes of "Mere Rang Mein" from Maine Pyaar Kiya, "Ek Duje Ke Liye" title track and so on. We wish the singer a speedy recovery from coronavirus soon.

(The above story first appeared on LatestLY on Aug 05, 2020 01:22 PM IST. For more news and updates on politics, world, sports, entertainment and lifestyle, log on to our website latestly.com).