Acharya Teaser: Chiranjeevi Is All Set to Teach the Bad Guys a Solid Lesson in This Action Drama (Watch Video)

Acharya is directed by Koratala Siva and veteran actor Chiranjeevi’s son, actor-producer Ram Charan would be seen playing a key role in the movie. He will essay the character Siddha in Acharya. 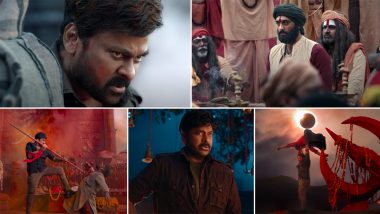 Megastar Chiranjeevi's next titled Acharya has been the talk of the town for quite some time now. The film will see the star in an action avatar and his fans are waiting with bated breath to see him fight some bad guys on the screen. The makers of the film are leaving no stones unturned to keep the hype of the film high and in the same attempt, they have now unveiled the teaser of Acharya. The teaser gives up a thrilling insight into what the film will look like and it sure will pique the excitement amongst Chiranjeevi's fans. Chiranjeevi Starrer's Acharya Team Responds to Copy Allegations, Call It 'Baseless' and Untrue (Read Statement).

The teaser begins with a powerful dialogue and a few people praying to god and it is a bloodbath that follows it. Chiranjeevi is seen fighting severe guys alone and his fierce look will definitely give you goosebumps. He introduced his character saying that while he is not very keen on teaching, people call him Acharya because he always teaches them a lesson. The background music adds more drama to the teaser and leaves you impressed. Check out the trailer here:

While the makers still have not announced the release date of the yet, reports suggest that Chiranjeevi and Kajal Aggarwal's new movie will hit the screens on April 9, 2021. Megastar Chiranjeevi had apparently asked director Koratala Siva to finish shooting as early as possible to ensure that the project has no more delays. The actor plays a social reformer in the movie and Kajal Aggarwal has been paired opposite him. Earlier Trisha Krishnan was roped in as the female lead but she exited the project due to creative differences. Acharya: Chiranjeevi and Kajal Aggarwal's New Movie to Hit the Screens on This Date?

Acharya is directed by Koratala Siva and veteran actor Chiranjeevi’s son, actor-producer Ram Charan would be seen playing a key role in the movie. He will essay the character Siddha in Acharya. It was speculated that the team may have roped in Rashmika Mandanna as the second female lead opposite Ram Charan but no mention about the same has been made yet. Touted to be made on a massive budget, is produced under the banners of Konidela Production Company and Matinee Entertainments.

(The above story first appeared on LatestLY on Jan 29, 2021 04:47 PM IST. For more news and updates on politics, world, sports, entertainment and lifestyle, log on to our website latestly.com).