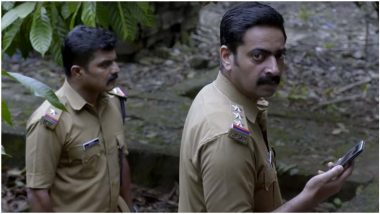 Antakshari is a Malayalam investigative thriller that is written and directed by Vipin Das. The movie is about a cop who is obsessed with playing Antakshari, and how a mysterious serial killer plays havoc with his mind and his family by taunting him with his own game. Antakshari stars Saiju Kurup, Priyanka Nair, Vijay Babu, Sudhi Koppa, Kottayam Ramesh, Shabareesh Varma, Binu Pappu among others. Produced by Jeethu Joseph of Drishyam fame, Antakshari has seen a direct OTT release on SonyLIV. Antakshari Movie Review: Saiju Kurup's Investigative Thriller Creeps Through Patchy Subplots and Delivers Some Chilling Moments.

So what happens in the end? Why is the killer, who murders two people in a family at various places and years seemingly without a pattern, is now obsessed with harming Kurup's SI Das and his family? Does the cop, whose own department has turned their backs on him save for the conscientious probationary SI Srinivasan (Sudhi Koppa), manage to save his own skin? Before we get into the details and explain what happens in the third act of Antakshari, let's remind you like always that the article is filled with major SPOILERS. Read at your own RISK!

As Das investigates into his own case, he realises that the killer is seeking out the new owners of a vintage Enfield bike that has been made in 1984, the one that is in his possession now. As the bike changed hands (because the male in the families are killed), the killer seeks out the new family and murders two members from there, preferably the father and the child.

The masked killer is Kishore, a man who suffers from serious psychological trauma after being abused by the higher-caste men in his village when he was a child and later by the rape and death of his mother by one of them, while the other (the first owner of the bike) had tied him to a tree and gagged his mouth. His mother was strangulated using the stethoscope (the bike owner was a doctor) in the process of the sexual assault, which is what becomes the killer's preferred weapon later on.

The young boy was unable to mete out revenge on his mother's assailants as they got killed in an accident that very day. Which is why he takes out his murderous rage on the new owners of the bike even after getting psychiatric treatment.

The Confrontation and the Capture

Kishore attacks Das at the night in latter's house by drawing him out after putting the bike on ignition, and then taunting and playing with his prey by making him forcibly play Antakshari. Kishore incapacitates Das and goes for his wife and daughter who are locked in their room, and the wife blocks the door. Das, while injured, stops the attacker and manages to tear off the mask but couldn't catch him as he runs off in the darkness.

It is then that Das realises that the killer can only be brought to his knees when the object of his obsession is destroyed forever. Das burns his own bike, coercing Kishore to come out of the darkness and forcing to show his face for the very first time, as he laments over the vehicle's destruction. Das overpowers his assailant and protects his family. Thanks to Nayana's deposition in favour of Das in the manhandling case, Das is free to return to service.

After Kishore is sent to psychiatric treatment once again, Das visits him and tells him that considering his condition and age, Kishore might get a reduced sentence. Das also tells him not to come after his family again. While Kishore maintains silence all this while, once Das moves away, he asks to himself which is the next letter to sing (for Antakshari), which is how he used to taunt Das and his daughter. Which means Kishore's condition hasn't improved and he might go after Das and his family - the last owners of the bike - after his release.

Earlier in the movie, Das' seniors (Binu Pappu) mocks him asking if his father named him Das after the singer Yesudas (I also had the same doubt), which is why Das is so obsessed with Antakshari. In the last scene with the same senior, Das tells him that his father had named him after a title of a book he loved. While the senior is clueless about the book, we know which book that is - Karl Marx's Das Kapital. This also explains Das' socialist nature and his adamancy to not use his surname.

While Antakshari wraps up the main storyline, there are still a couple of major questions that the film didn't answer. Like what about the family from whom Das bought the bike? The domestic abuse of the husband is never explored afterwards. Also curious to know how much that has affected his stepson psychologically. Is it he, and not Nayana who had killed the cats in the worn down house, that Das stumbled upon? Or was it the killer Kishore who was practising his murder on the cats? Was Nayana there in the house because she was hiding from Das, or because she saw either that stepson or Kishore commit the crimes on the animals? Bhoothakaalam Movie Review: Revathy and Shane Nigam Star in This Well-Acted ‘Horror’ Film That Frightens You With Its Realism.

The movie also ignores if Nayana had been sexually abused as a child, and if being deliberately mute is her way of dealing with that trauma. Did Kottayam Ramesh's despicable cop's fake statements that contained sexual abuse finally triggered her to speak up? In an earlier interview, the director Vipin Das has said that his original cut ran for more than three hours, which might have expanded on these subplots. In the present version, though, these subplots feel like dark and twisted red herring misdirects from the main mystery.

(The above story first appeared on LatestLY on Apr 22, 2022 08:20 PM IST. For more news and updates on politics, world, sports, entertainment and lifestyle, log on to our website latestly.com).