C U Soon is an experimental thriller directed by Mahesh Narayan of Take/Off fame. Fahadh Faasil has not only acted in the film, but also serves as a producer. The movie also stars Roshan Mathew and Darshana Rajendran. C U Soon is streaming on Amazon Prime Video. 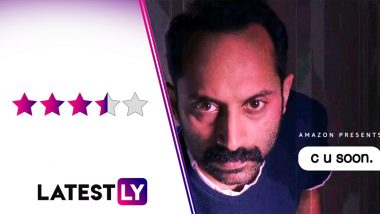 C U Soon Movie Review: There is hardly any doubt that Aneesh Chaganty's Hollywood thriller Searching has been an inspiration for Mahesh Narayan's C U Soon. Something lead actor Fahadh Faasil, also film's producer (along with wifey Nazriya Nazim), had admitted in his interviews. The format of both the films are the same - the events shown unfolded through mobile screens and laptops, never getting into real-life action. We see the premise being built through chats, video-calling, webcams and hacking. What's different are the actual premises. C U Soon Trailer: Fahadh Faasil, Roshan Mathew's Next is a Taut Thriller that Won't Disappoint (Watch Video)

CU Soon may have been shot during the pandemic period, when the lockdown rules forced the filmmakers to go innovative with the film. But unlike Gone Game or A Viral Wedding - both properties that used lockdown to go creative - C U Soon's story is not set during the pandemic, but a year before where we are now.

We first meet Jimmy (Roshan Mathew), a 31-year old executive who works in UAE, who has his Tinder profile matched with Anumol's (Darshana Rajendran). Sparks fly, video chats happen, virtual kisses are shared and within a week, Jimmy proposes to her online in the presence of his mother (Maala Parvathi) who also joins the video chat.

Anumol, who isn't very forthcoming about her personal details much and often talks to him under the blankets, however, accepts his proposal. Trouble begins when an bruised Anumol calls up Jimmy one day and pleads to him to take her away from her home. After he does so, Anumol disappears from his flat, when he confronts her father, leaving what looks to be a video suicide note.

With police after him, Jimmy seeks the help of his cousin Kevin (Fahadh Faasil), a frustrated programmer/hacker to find out more details about Anumol to save him. It is a race against time for Kevin, as he seeks the truth through shared laptop screens, hacking FB profiles, SIMs and Google chats, all to discover a horrifying scandal.

C U Soon's premise can be divided into three parts. The first part is the cute love story between Jimmy and Anumol. In real-life, their romance feels rushed, something both Kevin and Jimmy's mother keeps pointing out. But the way Mahesh Narayan, who earlier made the fantastic Take/Off, has portrayed the budding love story, we hardly feels so, especially because of Roshan and Darshana. Even though they only get to share the screen in a couple of scenes, the chemistry between the actors is striking. The buildup of the romance through chats and video-calls is done in a nice manner, and we really get why Jimmy falls for Anumol and becomes her knight in shining armour, a decision that backfires for him.

The second part is the mystery/thriller, that brings the terrific Fahadh Faasil to the forefront of things. This portion is the most engaging aspect of C U Soon. Sure, there are a few convenience tropes that we have to overlook, like the ease with which Kevin gets access to certain fields. In Searching, the protagonist was more of a novice when it comes to online apps, thereby adding more to the tense factor. Here, it feels somewhat diluted because the factor of Kevin being a hacker. Fahadh Faasil Birthday Special: From Being Called ‘Wooden’ to Being Hailed as Best in Business, Recapping the Spell-Binding Journey of the National Award Winner.

Also the extremely convenient plotpoint of his jealous girlfriend/boss (Amalda Liz) installing malware in Anumol's phone is hard to ignore, not to mention how casually the hacking of privacy is overlooked. Despite the niggles, though, these portions will keep you pretty hooked, as along with Kevin, we are totally immersed in knowing what happened to Anumol and who she is really.

Watch the Trailer of C U Soon:

It also helps that these scenes are spearheaded by Faasil, who gets to be in the centre of the action and delivers with panache. We have read articles of how expressive his eyes and, C U Soon makes full advantage of that, as with each scene, we see a myriad of emotions from vanity to casual sexism, to fear to desperation and remorse all in his eyes. The tight editing and the technical finesse also have to be lauded here (Mahesh also serves as editor and virtual cinematographer), and the (borrowed) ingenuity of the execution works well. Gopi Sundar's BG score manage to enhance the gripping feel even more. Also full marks to the sound editing team.

The third part is the expose of a social crime that I won't get into much for SPOILER reasons. It is in these scenes where the young Darshana Rajendran gets to shine the most, and the actress is absolutely fantastic here. It is a truly heartbreaking act from her, speaking to the camera, and in a sense, to us. Fahadh once again gets score here, completing his arc of being a bitter, vain programmer to someone who gets humbled down by the last few hours of his life. But the third act totally belongs to Darshana, just as the first act belonged to Roshan and second to Fahadh.

And yet, this portion is what I feel was the weaker part of C U Soon, the social cause aspect not really gelling well with the rest of the film. You begin to question some of the previous scenes, and though, you can fill the blanks there yourself, the half-baked plausibility is a hindrance. There is also the fact that Kevin has been kept away offscreen for a bit too long, so that emotional connect needed that the love story once brought feels missing.  But things do tie up well towards the end, with a promise of a sequel that would come out in theatres.

C U Soon is just one more fine example from a resurgent Malayalam Cinema showing that even lockdown can't restrain its fondness of delivering exciting stories. With brilliant performances and smart direction, the movie is more than worth a watch, even if it doesn't manage to overshadow its inspiration. C U soon is streaming on Amazon Prime Video.

(The above story first appeared on LatestLY on Sep 01, 2020 12:01 AM IST. For more news and updates on politics, world, sports, entertainment and lifestyle, log on to our website latestly.com).