Deivamagal actress Suchitra married Manikandan in secret. After exhausting all their funds during the lockdown, Suchitra and Manikandan visited the latter's native place. There, allegedly, Suchitra hatched a plan to rob her in-laws and made hubby execute it. He was apprehended and Suchitra's absconding. 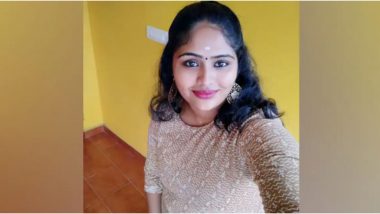 Okay, fellows, here is a true crime story that seems pulled out of a movie script. Tamil TV actress Suchitra is allegedly absconding after planning a robbery on her in-laws, and making her husband, Manikandan, execute it. Suchitra featured in a supporting role in the Tamil soap opera Deivamagal. As per reports, Suchitra and Manikandan, the son of a farmer, married in secret. Manikandan works as a driver and met Suchitra on the job. The couple exhausted all their monetary funds during the COVID-19 lockdown. With no work for five months, the couple struggled to make ends meet. Dog Saves Owner's Life By Taking a Bullet During Armed Robbery at Brakpan in South Africa (Watch Video).

As per reports, Manikandan travelled to his native place with the intention to introduce Suchitra to his family. When the family met Suchitra, there was some teething problem, but they finally accepted the marriage. God, they should have been careful.

Suchitra's focus was on the jewels in the house. She hatched a not-so-smart plan to rob her in-laws and decided to enlist her husband in the crime. Suchitra suggested that they can use the money to make a short film for YouTube and monetise it and gain fame.

As per reports, Suchitra left her in-laws' home citing work and reached Chennai. A few days later, Manikandan robbed the jewels of his parents' house. And off he went to join his lady love and spend the life in eternal bliss. Or so he thought. Delhi Shocker! Jeweller Fakes Robbery to Escape Paying EMIs on Bank Loans Taken for Gold Jewellery Business, Arrested.

Manikandan's parents filed a police complaint. It was not exactly challenging for the police to figure out who the culprit is. Manikandan was apprehended and put in jail. The news reached Suchitra, and as per reports, she's now on the run.

(The above story first appeared on LatestLY on Sep 16, 2020 10:29 PM IST. For more news and updates on politics, world, sports, entertainment and lifestyle, log on to our website latestly.com).