Here's exciting news about Rajinikanth's upcoming film Darbar! The motion poster of the film and also the theme music of Thalaivar are both set to be out on November 7. Sharing the big news birthday boy Anirudh Ravichander took to Twitter to give this special news to all his fans. 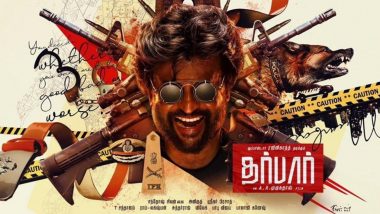 Darbar is one of the most anticipated films starring Rajinikanth. In the two first look posters released initially by the makers, we have seen the veteran actor in contrasting looks. In one of the looks, the South Megastar was seen in the role of a cop, in the second avatar, we got to see him a rather brawny look. The film's story is set in the backdrop of Mumbai and the actor even shot for the film in the city. Despite the delays, fans have been eagerly waiting to catch film soon. Thalaivar 168: Here’s When Superstar Rajinikanth Will Begin to Work on Director Siva’s Film.

Darbar's second look was an Onam treat for fans and now the film's composer, Anirudh Ravichander has dropped a major update of the film on his birthday. The composer turns 28 on October 16 and took to Twitter to share the release date of Darbar's new motion poster with Thalaivar theme music. Anirudh tweeted saying, "On this special day, very excited to give you all an update!#DarbarMotionPoster with #ThalaivarThemeMusic on Nov 7th Thalaivar Superstar @rajinikanth + @ARMurugadoss sir combo gonna be a blast this Pongal @LycaProductions."

On this special day, very excited to give you all an update!#DarbarMotionPoster with #ThalaivarThemeMusic on Nov 7th :)

Rajnikanth's other special project that has got fans going crazy is his film with director Siva. The film which has been directed by Siva has been tentatively titled Thalaivar 168. Certainly, November 7 is going to be a special treat for all the Rajini fans with two big treats dropping on the same day. Anirudh Ravichander Birthday: From Jersey's Adhento Vunnapaatuga Gaani to David's Kanave Kanave, Songs That the Music Composer Blessed Us With (Watch Videos).

As for Darbar, the film also stars Nayanthara, Suniel Shetty, Prateik Babbar, Nivetha Thomas and Yogi Babu in lead roles. The action thriller is all set to release on Pongal 2020.

(The above story first appeared on LatestLY on Oct 16, 2019 12:00 PM IST. For more news and updates on politics, world, sports, entertainment and lifestyle, log on to our website latestly.com).