The 1996 Tamil film Indian has completed 24 years of its release today. Kamal Haasan had bagged the National Film Award for Best Actor for Indian, directed by Shankar. 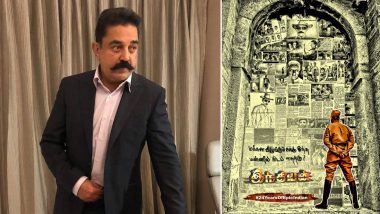 Kamal Haasan has been recognised as an influence for actors and filmmakers in Tamil Cinema. His contributions across film industries have been praised. The four time National Film Award winner has been winning hearts with some impeccable performances in his career and the film Indian is one among them. The 1996 Tamil film Indian has completed 24 years of its release today. Kamal Haasan played dual roles - a father and a son. Kamal Haasan had bagged the National Film Award for Best Actor for Indian, directed by Shankar. Kamal Haasan Starrer Indian 2's China Shoot Canceled Due to Coronavirus Outbreak.

The role of Kamal Haasan in the movie Indian is considered to be as one his career best performances. He played the characters Senapathy (a veteran Indian freedom fighter) and Chandra Bose aka Chandru. Indian was a commercial blockbuster in the Tamil film industry and fans cannot wait for its sequel, Indian 2, to be released. In the sequel, Kamal Haasan would be reprising his role as Senapathy from the first film. Twitterati is celebrating the occasion by using the hashtag #24YearsOfEpicIndian and you got to see what they have to say about this film and the its lead actor. Kamal Haasan's Indian 2 Shelved? Here's What the Producers Have to Say.

Pan-Indian ATBB in Tamil, Telugu & Hindi versions. Shockingly Huge BO numbers all over the world back in 1996

A Masterpiece From Director Shankar

Fans Are Eagerly Waiting For Indian 2

Indian Bagged One The Most Prestigious Awards

Indian 2 will also be helmed by Shankar. There were rumours that this film has been dropped. The spokesperson of Lyca Productions confirmed to India Today that the rumours are baseless. The spokesperson was quoted as saying, “These are baseless rumours. We have completed almost 60% of the film's shoot. How will we consider dropping the project? We are planning to resume the shoot post lockdown.” Indian 2 is expected to hit the screens in November this year.

(The above story first appeared on LatestLY on May 09, 2020 01:49 PM IST. For more news and updates on politics, world, sports, entertainment and lifestyle, log on to our website latestly.com).