Kichcha Sudeep and Madonna Sebastian's action thriller Kotigobba 3 released on Dussehra 2021 in theatres. However, sadly kannada film is the latest victim of piracy, as it has been leaked online for free watch and download. 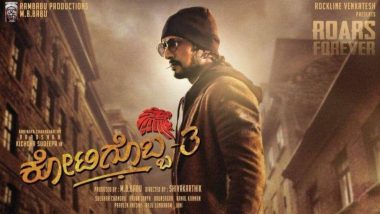 Kotigobba 3 which was supposed to release on October 14, got a day delayed and hit the big screens on October 15 i.e Dussehra. Starring Kichcha Sudeep and Madonna Sebastian in key roles, the Kannada film is helmed by Shiva Karthik. The action thriller takes forward the story of  Kotigobba 2 and goes international this time. Even the critics have lauded the movie and tagged it as a commercial entertainer. However, unfortunately, within a few hours of its release in theatres, Kotigobba 3 has got leaked online. The film is now available for streaming on torrent sites. There's an HD print available of the show to watch online. Kotigobba 3: Fans Pelt Stones at Theatre As Kichcha Sudeep’s Film Gets Delayed (Watch Video).

Kotigobba 3 full movie in HD has been leaked on several torrent sites like Filmywap, Onlinemoviewatches, 123movies, 123movierulz, Filmyzilla, and other pirated versions of the series in HD (300MB free download in 1080p, 720p, HD online) are available for the audience to watch.

Meanwhile, when Kotigobba 3 was delayed by a day due to a tiff between the producer and financier, fans of Sudeep had damaged a theatre in Vijayapura and also resorted to stone-pelting. Apart from the lead, the film also stars Shraddha Das, Aftab Shivdasani, and P Ravi Shankar in supporting roles. The film has music composed by Arjun Janya. Stay tuned!

(The above story first appeared on LatestLY on Oct 15, 2021 09:15 PM IST. For more news and updates on politics, world, sports, entertainment and lifestyle, log on to our website latestly.com).