Thalapathy Vijay, Malavika Mohanan, Vijay Sethupathi’s film Master is going to be a treat during the time of Pongal. Ahead of the film’s release, let’s take a look at the cast, plot, music and other key details. 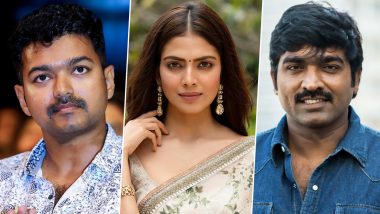 Due to the coronavirus pandemic, several films releases across industries had to be postponed. The delay happened owing to the shoots stalled or production delay or due to theatres being closed down in the wake of the outbreak. The entertainment industry had a huge hit in 2020. Many filmmakers and producers then decided to release their movies on OTT platforms so that there’s no further loss. Whilst some supported the makers’ decision, this decision left many film exhibitors upset. Many even started wondering what would happen in case of Thalapathy Vijay, Malavika Mohanan, Vijay Sethupathi’s film Master. Will it release in theatres or on any streaming giant. Master Leaked: Vijay Starrer Faces Wrath Of Online Piracy Ahead Of Its Grand Theatrical Release, Thalapathy Fans Request Not To Share Any Video Clips.

The makers of the upcoming Tamil film Master then announced about the theatrical release of the film. It was confirmed that Master would be a treat during the time of Pongal. Ahead of the film’s release, let’s take a look at the cast, plot, music and other key details. Master Song Vaathi Raid Promo: Thalapathy Vijay Pulls Off Impressive Action Sequences In the Anirudh Ravichander Song.

Cast – Master stars Thalapathy Vijay as the protagonist and Vijay Sethupathi as the antagonist. Malavika Mohanan will be seen as the female lead. The other actors who have been roped in to play key roles include Nassar, Arjun Das, Andrea Jeremiah and Shanthanu Bhagyaraj.

Here's the #Master treat to set your screens on 🔥

Plot – Directed by Lokesh Kanagaraj, this Tamil film is touted to be an action-thriller. Vijay essays the role of a gutsy but an alcoholic professor in Master, named John Durairaj aka JD. He is sent to a juvenile school where he comes across Vijay Sethupathi, who essays the character named Bhavani, a ruthless gangster.

Music – Anirudh Ravichander has composed the songs and background music of Master. The film’s soundtrack album features eight tracks and we are sure, all of them are going to be a huge hit.

Teaser – Kollywood lovers jumped with joy when the makers released the film’s teaser that highlighted the action-packed drama between Thalapathy Vijay and Makkal Selvan Vijay Sethupathi. Twitterati had claimed that it is the first South Indian film teaser to garner more than 50 million views and fans had started trending about it using the hashtag #MasterTeaserHits50Mviews.

Movie Review - Lokesh Kanagaraj's latest, Master, is an unusual movie. It gives a good backstory to the villain, played by Vijay Sethupathi, even dedicating the first fifteen minutes of the film for the same. What's more, Sethupathi's Bhavani is also shown to be a religious person in a secular way, wearing amulets of three different religions, 'cos as he claims, he isn't sure which God can come to his help. On the other hand, the hero, Thalapathy Vijay's JD is a persistent alcoholic. He doesn't come with a backstory, which is anyway explained through one throwaway line and acts often irresponsible. In that way, Master is definitely an unusual movie for its genre. Master Movie Review: Thalapathy Vijay and Vijay Sethupathi Take Their Sweet Time To Come to Blows in Lokesh Kanagaraj’s Tiresome Entertainer (LatestLY Exclusive).

Box Office – The audiences will have to wait for a day to know the exact details about its box office collection on the opening day. LatestLY will get back to you soon with the BO details of Master. Stay tuned!

(The above story first appeared on LatestLY on Jan 12, 2021 12:18 PM IST. For more news and updates on politics, world, sports, entertainment and lifestyle, log on to our website latestly.com).