The film's first look teaser shows Nandamuri Balakrishna in a full-on action avatar and delivering a powerful dialogue in the video. 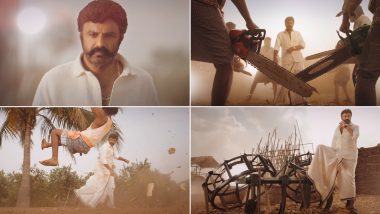 Nandamuri Balakrishna is all set to turn a year older on June 10. The Telugu Cinema superstar is all set to celebrate his 60th birthday and fans have already started to send their warm wishes for the star. The makers of NBK 106 had earlier revealed that they will be dropping a surprise for fans with the first look of the film. Fans have been using the hashtag #BB3Roar on Twitter since morning and well their treat, the first look has now arrived. The film's first look teaser shows Nandamuri Balakrishna in a full-on action avatar and delivering a powerful dialogue in the video. NBK 106: Nandamuri Balakrishna and Director Boyapati Srinu Teams Up For the Third Time (View Launch Ceremony Pics).

Featuring Nandamuri Balakrishna, the teaser with a duration of 1-minute and 4-seconds shows us the superstar fighting off his enemies in style. Sharing the first look video, The makers of the #NBK106 took to their social media handle and wrote, "Here's First Roar of #BB3."This project marks the third outing of Nandamuri Balakrishna and hence fans have been more than excited for it. COVID-19 Outbreak: Nandamuri Balakrishna Donates Rs 50 Lakh Each to Andhra Pradesh and Telangana CM’s Relief Fund.

The film is expected to become a mass entertainer and it sure seems to have all the elements for it given the kind of artists working on it. NBK 106 is being produced by Miryala Ravinder Reddy and the film's music has been scored by Thaman S. After seeing the smashing first look, we bet fans are eagerly waiting to get a glimpse of something more.

As for Nandamuri Balakrishna's birthday, we bet fans couldn't have asked for a better treat than this. The celebrations for the superstar's birthday have already begun and with this teaser video, the #BB3Roar hashtag could soon be rising to a top trend.

(The above story first appeared on LatestLY on Jun 09, 2020 07:49 PM IST. For more news and updates on politics, world, sports, entertainment and lifestyle, log on to our website latestly.com).