Nandamuri Balakrishna's 105th film marks Nandamuri Balakrishna and director KS Ravi Kumar's collaboration for the second time after Jai Simha. Today, makers took to Twitter to drop new posters from the film online (ahead of Ganesh Chaturthi) and it has set the internet buzzing. The poster features the lead actors Balayya and Sonal. Check it out! 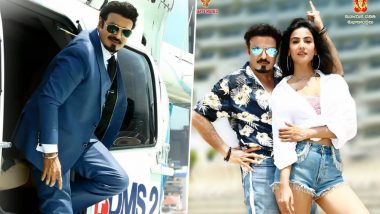 Nandamuri Balakrishna's 105th film, tentatively titled Ruler, is one of the eagerly awaited films this year. The film marks Nandamuri Balakrishna and director KS Ravi Kumar's collaboration for the second time after Jai Simha, which had scored a super hit at the box office. Recently, the makers unveiled the actor's first look from the film, where he was seen sporting a blue suit and stunning sunglasses, and fans couldn't stop obsessing over the star's suave avatar. Today (September 1) Producer C Kalyan took to the micro-blogging site to drop new posters from the film online (ahead of Ganesh Chaturthi) and it has set the internet buzzing. Chandrababu Naidu’s Kin and Tollywood Actor Nandamuri Balakrishna Purchased 500 Acres Land in Amaravati: YSRCP Accuses TDP of Insider Trading

After impressing us with Balayya's never-seen-before look, the new posters feature the lead actress Sonal Chauhan. Yes, one of the posters see NBK alighting from a helicopter, while the other one features Balayya and Sonal. This picture looks like a still from a song in the film. The Producer Kalyan, in his tweet, also mentioned that the second schedule of the film will start from September 5 at Ramoji Film City. NTR Mahanayakudu Movie Review: Nandamuri Balakrishna – Rana Daggubati’s Political Drama Is an Average Watch, Say Critics

Helmed by KS Ravi Kumar and bankrolled by C Kalyan under Happy Movies, NBK 105 marks the third time collaboration of Sonal Chauhan and Balakrishna after Legend and Dictator. Besides Nandamuri Balakrishna and Sonal Chauhan, the film also features Vedika as the second female lead while Prakash Raj, Bhumika Chawla will be seen essaying pivotal roles in the film. While much of the details about the film is kept under wraps currently, Chirantan Bhatt will score the music for the film. Stay tuned!

(The above story first appeared on LatestLY on Sep 01, 2019 02:05 PM IST. For more news and updates on politics, world, sports, entertainment and lifestyle, log on to our website latestly.com).