Nivin Pauly had shared the first look of Padavettu in June 2019. The film is helmed by Liju Krishna and will be produced by Sunny Wayne, also marking his debut as a producer. 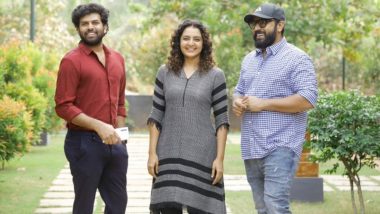 Nivin Pauly had shared the first look of Padavettu in June 2019. Back then the actor had only revealed details of the film’s director and producer. The film is helmed by Liju Krishna and will be produced by Sunny Wayne, also marking his debut as a producer. In December 2019, Aruvi fame Aditi Balan confirmed that she is making her Mollywood debut with Padavettu. And yesterday, the makers announced that Manju Warrier has joined the star cast of this upcoming flick. And with that, it also marks the first collaboration between Manju Warrier and Nivin Pauly. Padavettu: Nivin Pauly Shares the First Look of His Upcoming Film - Read Details.

Manju Warrier joining the star cast of Padavettu has definitely left all her fans excited. All are keen to know about her character in this movie. In the picture shared by Nivin, Manju is seen in a different look. Her hairstyle is curled up and its upto shoulder length. After watching Manju in her Kollywood debut Asuran, we wonder how she is going to amaze us all in Padavettu. Padavettu: Aruvi Fame Aditi Balan to Make Her Mollywood Debut Opposite Nivin Pauly.

Padavettu will also feature Shine Tom Chacko and Shammi Thilakan in key roles. The film is currently being shot in Kannur. On the work front, the film’s lead actor Nivin Pauly was last seen in Moothon and the film opened to positive response from critics and fans. Stay tuned for more updates from the world of entertainment.

(The above story first appeared on LatestLY on Feb 17, 2020 11:27 AM IST. For more news and updates on politics, world, sports, entertainment and lifestyle, log on to our website latestly.com).