The flick is directed by Frederick JJ, with the music score by Govind Vasantha. 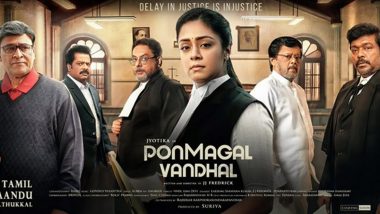 It is not a new thing for the filmmakers in the south film industry, to make the most of the festivals. Every festival marks as the double treat for the cine-goers for the new revelations and releases from the cine world is made on these auspicious days. As today it is also Tamil New Year, the makers of Ponmagal Vandhal, thought it would be a perfect time to release a new poster featuring Jyothika. Suriya to Turn 45 on July 23, but Fans Trend #PhenomSURIYABdayIn100D and Start the Celebrations on Twitter Much In Advance.

In the Suriya starrer, the fans will see Jyothika, Parthiban, Pratap Pothen and Pandiarajan playing lawyers. Also they will get to see actors like Bhagyaraj and Thiagarajan in very important roles. The makers shared the still from the court room drama with the caption, "Justice should be served right on time! Let's stay safe now and hope for a bright and better future, Happy Tamil New Year!" Check it out below.

Meanwhile, it is a no-brainer that like any other film industry, Kollywood too is shut. The actors are making sure to stay indoors and set right example for their massive fan base. Many of them also have made hefty contributions in monetary ways to various relief funds. However, like they say, the show must go on. Hence, on such auspicious days, the makers are making their fans happy in whatever way they can. The flick is directed by Frederick JJ, with the music score by Govind Vasantha.

(The above story first appeared on LatestLY on Apr 14, 2020 02:28 PM IST. For more news and updates on politics, world, sports, entertainment and lifestyle, log on to our website latestly.com).