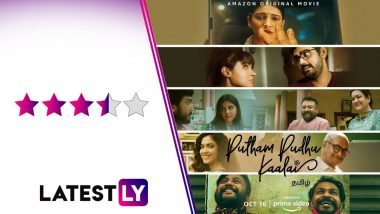 Putham Pudhu Kaalai Movie Review: Directors Sudha Kongara, Gautham Vasudev Menon, Suhasini Maniratnam, Rajiv Menon, and Karthik Subbaraj come together to make a Tamil anthology film based on relationships during COVID-19 times. Putham Pudhu Kaalai has five shorts, made with different cast and a different team, each standing out from the rest thanks to its distinct flavour and impact. Like most anthology films, there are a couple of really good ones, a couple of okay ones, and one that sticks out like a sore thumb. Putham Pudhu Kaalai: Kalyani Priyadarshan Shares Experience of Filming for Amazon Prime Movie;

Putham Pudhu Kaalai begins with the drawing of a flower with five petals that are left uncoloured. Each petal gets coloured yellow when a segment gets done. Most of the segments, I believe, are shot in the most convenient locations available to the cast and crew, sometimes at the actors' own houses. Which is why we also have actors related to each other in the same short film. Let's review each segment separately.

The task of colouring the first petal goes to Sudha Kongara's Ilamai Idho Idho, that brings together the real-life father-son pair of Jayaram and Kalidas Jayaram for the first time. The family reunion doesn't stop there, as we also see the pictures of Jayaram's real spouse Parvathy, who is supposed to be his character's deceased spouse. The movie also reunites Jayaram with his co-star of many movies, Urvashi.

Ilamai Idho Idho is about a widower (Jayaram) who gets a chance to bring his old flame (Urvashi), who had also lost her husband, to his house for a fun weekend. They have been carrying out a covert affair away from the eyes of the kids for a couple of years, and uses a lie of a yoga retreat so that they can have this rendezvous. However, on that very same night, PM announces the 21-day lockdown, keeping them together under the same roof and making them spend time like a real married couple.

What's fun about this short is that whenever the couple gets naughty, we see their younger selves, which are played by Kalidas and Kalyani Priyadarshan. While this loses us an opportunity to see Jayaram and Kalidas share screen together, the chemistry between both the pairs are absolutely fantastic. Kalidas (very energetic) and Kalyani (who looks dazzling and very natural) are spunky enough to create the youth exuberance, while Jayaram and Urvashi show their ace mettle in the emotional scenes. Sudha Kongara's light-hearted treatment keeps the segment lively, aided by GV Prakash Kumar's retro score. All in all, a fine start.

The next segment is Gautham Menon's Avarum Naanum - Avalum Naanum. It is about a young woman (Ritu Varma) who comes to stay with her estranged maternal grandfather (MS Bhaskar) during the lockdown to give him company. While it begins as a feel-good, harmless narrative about two relatives, with a skewered past, bonding with each other, Avarum Naanum - Avalum Naanum gains strength in its third act.

Gautham Menon is a master at creating well-written scenes about characters conversing with each other, and it is such a scene that elevates this segment. The thatha revealing the reason of his anger with his daughter has the director's stamp all over, with MS Bhaskar's magnificent performance bound to bring tears in your eyes. The segment also boasts a lovely semi-classical composition "Kanna Thoodhu Po Da", by the dependable Govind Vasantha.

The third segment, Coffee, Anyone?, is a sort of family reunion for the Haasan cousins. Suhasini Maniratnam returns to direction with this short after a gap of 25 years (her last directorial was the 1995 film Indira). She also acts in the film, with her cousins Anu Hasan (who was the lead in Indira) and Shruti Haasan playing her sisters. It's about two sisters (Suhasini and Anu) who comes to stay in their parents' house, after learning that their mother has slipped into coma. The third sister (Shruti) is in Mumbai, and is still angry with her mother for her preferential treatment to her elder siblings. Putham Pudhu Kaalai: Suhasini Mani Ratnam, Gautham Menon and More– 5 Directors Collaborate With Amazon Prime to Deliver 5 Heartwarming Stories.

Coffee, Anyone? is another likeable segment in the film, thanks to its heartwarming narrative, the easy camaraderie between Suhasini and Anu, and how each relationship is built. Be it between the sisters, or between their parents (the veteran Kathadi Ramamurthy is excellent here), or between the parents and their daughters - each relationship is dealt with warmth and love. You can't help but smile when the sisters do a impromptu social distancing dance when one of them shares a good news. Or shed a tear in the final scene.

The performances are amazing, with even Shruti Haasan, who is not exactly praised for her histrionics, delivering a fine act in her second scene. PS - the actress who plays Suhasini's mother is also her amma IRL.

The fourth segment, Reunion, is directed by former cinematographer-turned-director Rajiv Menon. The story is about a chic musician (Andrea Jeremiah) who ends up staying in the home of her former school friend (Gurucharan C), who is now a doctor and is staying his arthritis-stricken mother (Leela Samson). He is isolating himself after being in the presence of a suspected COVID-19 patient, and she is tasked to take care of his mother. The issue is, she has a problem of her own, that doesn't make her a very good caretaker.

I found Reunion to be the weakest in the anthology. It has its moments, and like with the previous three segments, the strengths lie in characters bonding with each other, with Leela Samson always a welcome presence. However, the direction feels pretty average, it isn't slickly shot (which is surprising since it is a Rajiv Menon film) and Andrea and Gurucharan's performances are just about okay in a film that has otherwise some very wonderful performances.

The last segment is the odd one out here, but that's expected when it is directed by the maverick Karthik Subbaraj. His Miracle is about two thieves (Bobby Simha and Sharath Ravi) who try to make big bucks during lockdown and end up having a night they will never forget.

Miracle is replete with trademark Karthik Subbaraj humour that we had loved in his previous films like Pizza and Jigarthanda, something his past couple of releases were sorely missing. Especially Petta. It doesn't have the goodness that the rest of the segments have in common, and it is also the only segment that doesn't restrict itself to one location. But it works exactly because it stands out! There are plenty of surprises; though the conclusion is predictable, it is still funny to watch. It helps when both your lead actors are terrific here! Miracle is also the best edited segment among the lot.

- Most of the Segments Work

- The Fourth Short Lags Behind

- Generic Feeling, Save for the Last One

Putham Pudhu Kaalai is a well-done example of how creativity can do wonders even in trying circumstances like the pandemic. Though a couple of segments don't completely work, the anthology leaves you with a heartening sense of satisfaction of watching a feel-good cinema with fine performances and good writing. Putham Pudhu Kaalai is streaming on Amazon Prime Video.

(The above story first appeared on LatestLY on Oct 15, 2020 08:09 PM IST. For more news and updates on politics, world, sports, entertainment and lifestyle, log on to our website latestly.com).