Ram Charan Birthday Special: Five Throwback Pictures Of The Actor That Will Leave You Stunned!

Ram Charan celebrates his birthday today and we celebrate it by putting together five throwback pictures of the actor that will always be special. It had to begin with his father Chiranjeevi and also includes Allu Arjun and Rana Daggubati. 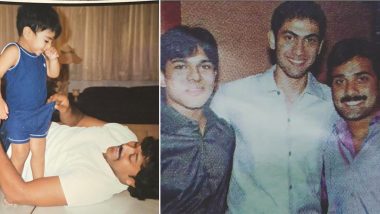 Rama Charan celebrates his birthday today. He is one of the biggest stars in the Telugu industry having debuted in 2007 with Chirutha. He was introduced as the son of superstar Chiranjeevi, but he steadily managed to make his own mark. Magadheera became his biggest turning point which not only left the South market in awe of him but the entire nation. The actor debuted in Bollywood in 2013 with the remake of Zanjeer. Even though the film couldn't make much money at the box office, he was noticed by many. Now he is part of yet another S S Rajamouli epic RRR movie. His look from the film was revealed yesterday and it's enough to get everyone wildly excited about this movie. RRR: Ram Charan’s Bare-Bodied Look As Alluri Sita Ramaraju From SS Rajamouli’s Magnum Opus is Pure Dynamite!

Since we are on looks, let us take you on a pictorial trip of Ram Charan's life with some throwback pictures.

I was naturally overjoyed when @AlwaysRamcharan was born.Much later it occurred to me there was perhaps a reason why he was born on 27th March #WorldTheatreDay ‘Prapancha‘Rangasthala’dinotsavam’! He took to acting like a fish to water.On this eve,Many Many Happy Returns #Charan! pic.twitter.com/H38AflKwGi

The swag is unmissable

When your friends embarrass you with such pictures

Two superstars in one frame

As if on cue, Charan's wife Upasana shared a rare pic of two of them together posing next to a bike. That made us dig up the past and look for his throwback pictures.

(The above story first appeared on LatestLY on Mar 27, 2021 12:00 AM IST. For more news and updates on politics, world, sports, entertainment and lifestyle, log on to our website latestly.com).