RRR is the upcoming period drama that is directed by SS Rajamouli. The film features Ram Charan and Jr NTR in the lead in this magnum opus. 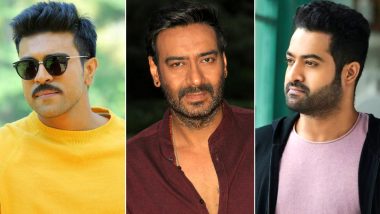 RRR is the upcoming period drama that is directed by SS Rajamouli. The film features Ram Charan and Jr NTR in the lead in this magnum opus. This film also marks the debut of lead actress Alia Bhatt and Ajay Devgn (who’d be seen in an extended cameo) in South Cinema. It is known that Ram Charan and Jr NTR would be seen playing the role of revolutionary freedom fighters, Alluri Sitarama Raju and Komaram Bheem, respectively. Now as per leading media reports, Ajay Devgn would be playing their guru. Ajay Devgn Has an Extended Cameo in SS Rajamouli's RRR?

According to a report Mirror, Bollywood actor Ajay Devgn would be seen playing lead actors Ram Charan and Jr NTR’s guru in their early years. Talking about Ajay’s role and about his shooting schedule, a source revealed to the tabloid, “Ajay has shot for around 10 days at Ramoji Film City in Hyderabad, where Delhi from the 1900s was recreated. He appears in the flashback scenes.” RRR: Ajay Devgn to Play the Role of Ram Charan’s Father in SS Rajamouli’s Magnum Opus?

The source also revealed how Ajay Devgn bagged a role in RRR. “Rajamouli paid a tribute to him in Makkhi and the two have been good friends since. Ajay gave the nod within minutes of the narration. Though it is an extended cameo, his track will remind one of his National Award-winning performance in The Legend of Bhagat Singh and sets the tone for the drama involving the two leads,” said the source.

RRR was scheduled to be released in January next year. But owing to the ongoing crisis, the release date might get pushed again. The makers are now planning to release RRR by April end.

(The above story first appeared on LatestLY on Jun 24, 2020 05:02 PM IST. For more news and updates on politics, world, sports, entertainment and lifestyle, log on to our website latestly.com).