As stated by India Today, the legendary singer's body will be taken from from the hospital at 4 pm on Friday. The funeral is expected to be held on Friday evening or Saturday morning. 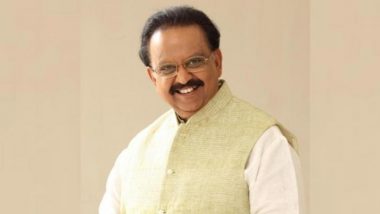 Legendary Indian singer SP Balasubrahmanyam passed away on Friday, September 25 in Chennai. The veteran singer had been admitted to the MGM hospital since a while, breathed his last today (September 25) due to lung failure. Reports state the SPB will be laid to rest at his farmhouse in Red Hills, Tamaraipakkam, a place located in the outskirts of Chennai. As stated by India Today, the legendary singer's body will be taken from from the hospital at 4 pm on Friday. The funeral is expected to be held on Friday evening or Saturday morning. SP Balasubrahmanyam No More: Salman Khan, Akshay Kumar, Ajay Devgn and Others Mourn his Tragic Demise (View Tweets).

The late singer's family including son SP Charan, wife Savitri, sister Shailaja and daughter Pallavi have been in the hospital since morning. Earlier today, his son, SP Charan, informed the news of his father's demise to the media, saying, "My dad breathed his last at 1:04 pm. Thank you everyone for your prayers. My dad will live long till his fans remember him."

It has also been reported that SP Balasubrahmanyam's family are trying to seek permission from the officials for public homage at his Chennai residence. With a career spanning over five decades, SP Balasubrahmanyam sang over 40,000 songs across languages and hence also gathered a huge fan base. The singer's passing has come as a shock to his fans who are hoping to pay their last respects to the singer whose melodious voice will certainly live in their hearts forever. SP Balasubrahmanyam No More: 6 Beautiful Tracks Sung by the Legend for Kamal Haasan, Chiranjeevi, Kajol's Films That Won Him National Awards (Watch Videos).

The singer's family is also expecting visitors and relatives to fly into Chennai to see the singer's mortal remains. The last rites of the late singer will be performed by his son.

(The above story first appeared on LatestLY on Sep 25, 2020 03:59 PM IST. For more news and updates on politics, world, sports, entertainment and lifestyle, log on to our website latestly.com).