Since movie theatres in France and Germany were allowed to open with new safety protocols, makers of Vijay's Bigil decided to re-release their film in those countries to celebrate the actor's birthday. 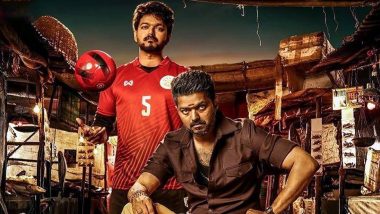 Thalapathy Vijay's European fans are in for a big treat as the makers of his last release, Bigil have planned a special treat for them. As per new reports, Bigil is expected to re-release in France and Germany on the actor's upcoming birthday. While Indian fans will have to wait for some more time before his next, Master is able to release in theatres, the ones who hail or reside in France and Germany can meanwhile start celebrating his special day way in advance. Master Second Look: Thalapathy Vijay has the Perfect Pongal Treat for his Fans (View Pic).

While theatres across the globe are still shut owing to the ongoing coronavirus pandemic, the ones in few European countries have been allowed to re-open. France and Germany have green-lighted the opening of film theatres provided they follow the new safety protocols and ensure social distancing. Bigil is expected to run in those theatres from June 22 to June 30.

Vijay fans are expecting the makers of his next, Master to drop the film's teaser on his birthday which falls on June 22. While the actor has finished shooting for it, the team is now working on its post-production. It was earlier slated to hit the screens in April this year but got delayed amid the coronavirus pandemic. The new release date of the same is awaited.

(The above story first appeared on LatestLY on Jun 18, 2020 01:18 PM IST. For more news and updates on politics, world, sports, entertainment and lifestyle, log on to our website latestly.com).