This week we have many big and exciting movies lined up for release in theatres across languages Hindi, Telugu, English, Tamil, Malayalam, Marathi and many more. Let's quickly take a complete look at the movies releasing on the big screens this week. 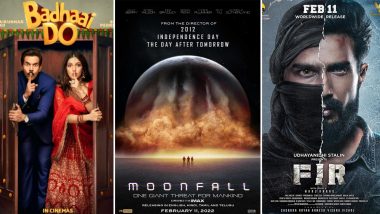 We are kick-starting the second week of February 2022 and with that we have a long list of movies lined up for release across languages Hindi, Telugu, English, Tamil, Malayalam, Marathi and many more. The cinema halls are running with 50% and 75% occupancy on different states. Meanwhile, talking about the biggest release of the week it would be Badhaai Do, which is all set to release on February 11. The family entertainer revolves around a couple who gets committed into marriage of convenience and the flick will also unravel a sweet LGBTQ+ love. The comedy movie stars Rajkummar Rao, Bhumi Pednekar in lead roles and  Seema Pahwa, Sheeba Chaddha, Nitesh Pandey, Lovleen Mishra, Chum Darang, Shashi Bhushan and Deepak Arora in supporting roles. Badhaai Do Movie: Review, Cast, Plot, Trailer, Release Date – All You Need to Know About Rajkummar Rao and Bhumi Pednekar’s Film!

Another interesting release would be Moonfall, the sci-fi disaster movie will hit the big screens on February 11 in India. Earlier, the flick was released in US on February 4. The movie stars Halle Berry, Patrick Wilson, John Bradley, Charlie Plummer, Michael Peña, Donald Sutherland and Kelly Yu. Another big release of the week would be FIR, which is all set to hit the theatres on February 11. The Tamil-language actioner stars Vishnu Vishal, Gautham Vasudev Menon, Reba Monica Johna, Manjima Mohan and Raiza Wilson, among others in key roles. Moonfall Movie Review: Halle Berry, Patrick Wilson’s Disaster Film Directed by Roland Emmerich Receives Mixed Response From Critics.

(The above story first appeared on LatestLY on Feb 08, 2022 05:56 PM IST. For more news and updates on politics, world, sports, entertainment and lifestyle, log on to our website latestly.com).