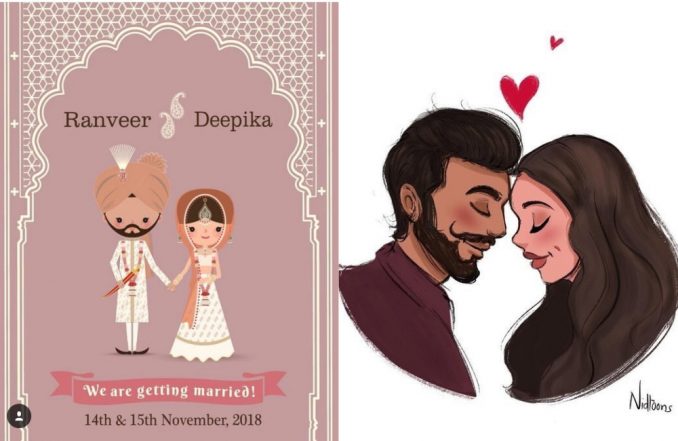 Love leaves a warm fussy feeling not just in those who’re experiencing it, but also those who witness it. Looks like Ranveer Singh and Deepika Padukone’s six-year affair leading to the aisle and their happily ever after has made fans equally happy if not more. When DeepVeer as they are popularly referred to on social media confirmed news of their November wedding and announced the dates, those shipping the couple rejoiced. Industry folks too congratulated the beautiful couple online. It was interesting that Ranveer and Deepika announced their marriage news on the same day Karan Johar’s show Koffee With Karan season 6 was to premiere. The filmmaker-turned-host tried hard to extract a response from the Padmaavat heroine on her much-talked about wedding at Lake Como.

While Deepika played difficult in the beginning and didn’t seem very comfortable divulging details, the actress eventually succumbed to Karan and Alia Bhatt’s pressure and revealed that she was getting hitched before Alia and Ranbir Kapoor. The episode was awkward and it would be safe to say that Karan did not try very hard to make Deepika comfortable and was clearly biased towards his protégé Alia. Coming back to Ranveer-Deepika wedding, the reaction was all over the internet – fans rejoiced, congratulatory messages poured in, memes were made and in Dubai there was even a fountain show dedicated to the lovebirds.

Amongst all the gestures online, there were some who made more effort than the rest. We got our hands on a bunch of fan-made poster/pictures/artwork of Deepika and Ranveer that will make the couple’s day even more special. Here are top three picks.

This fan created the “I do” moment of Deepika-Ranveer even before they walked up the aisle.

We bet the Ram Leela stars wouldn’t mind getting this fan to make their wedding invite.

And yes, this was one of the first pics that broke the internet way back in May 2018 when rumours of Ranveer-Deepika wedding first started doing round.

Not to forget the many portraits....

While Ranveer and Deepika have confirmed the wedding they’ve not divulged any details. However, reports suggest that there will be an elaborate ceremony in Italy’s Lake Como. This will be an intimate affair with only close friends and family in attendance. Buzz was also that Deepika’s mother has organised a puja for the couple ahead of their wedding in Bengaluru on November 10. Ranveer and Deepika may not take off for a honeymoon immediately after their wedding due to their work commitments. Don't miss: Unlike Anushka Sharma and Virat Kohli, Ranveer Singh and Deepika Padukone’s Wedding Will Not Be a Secret Affair

They’re meant to be .. pic.twitter.com/M2lhDpz04J

“ Hath chod ke chaali kidhar, we are made for each other “ #DeepVeerKiShaadi pic.twitter.com/X02JIvIXC0

Ranveer has completed work on Zoya Akhtar’s Gully Boy with Alia Bhatt. The actor is filming for Rohit Shetty’s Simmba and has Karan Johar’s Takht with Kareena Kapoor Khan, Kabir Khan’s ’83 in the pipeline. Deepika had to give up Vishal Bhardwaj’s next due to Irrfan Khan’s health, has signed Meghna Gulzar’s next, which the actress will also be producing. Apart from this, buzz is that Deepika and Ranbir Kapoor have signed another film together after Imtiaz Ali’s Tamasha – Luv Ranjan’s untitled next.