Aarya Season 2: Sushmita Sen Is a No-Nonsense Lady Boss as She Shares Her Still from Upcoming Disney+ Hotstar Show

Actress Sushmita Sen kicked off the hype for the much-awaited second season of her web series Aarya, with a strong Instagram post on Friday. 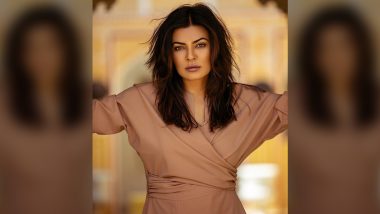 Actress Sushmita Sen kicked off the hype for the much-awaited second season of her web series Aarya, with a strong Instagram post on Friday. "Keep all your battles outside these gates, for if you try to bring them in...it's WAR" #Aarya #season2 #manningthegates #jaipur. A fierce Aarya captured by the incredibly talented @schezwanfranky ???? #thefrankseries @madnesspictureco I love you guys!!! #yourstruly #duggadugga," she write alongside an image of herself. Aarya Season 2: Sushmita Sen Begins Shooting for Ram Madhvani’s Disney+ Hotstar Show.

The actress reprises the titular role of Arya Sareen in the gangster series, which will also star Ankur Bhatia. Sushmita is currently shooting in Jaipur for the second part of the series, directed by Ram Madhvani. Last year, the first season of the show marked her return to showbiz after five years, since she appeared on screen. Sushmita Sen and Rohman Shawl Pose for Pictures and His ‘I Survived Aarya 360 Degrees’ T-shirt Has Our Attention.

Her last-released film before Arya was the Bengali arthouse film Nirbaak.

(The above story first appeared on LatestLY on Mar 12, 2021 07:36 PM IST. For more news and updates on politics, world, sports, entertainment and lifestyle, log on to our website latestly.com).