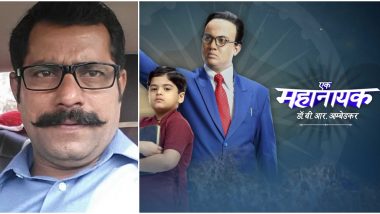 After a crew member of Mere Sai tested positive recently for COVID-19, shooting for the show in Naigaon was halted for almost 4 days. And now, the pandemic has befallen another TV show set- that of AndTV's Ek Mahanayak Dr BR Ambedkar. The show's actor Jagannat Nivangune, who plays the role of Bheemrao's father, has tested positive for COVID-19 along with a few other crew members. The show's shooting has obviously stopped and as per reports, a medical team has taken samples from others present on the set and is also getting in touch with those who have been in direct contact with the affected patient. And TV Shows Bhabhiji Ghar Par Hai, Happu Ki Ultan Paltan and Gudiya Humari Sabhi Pe Bhaari Resume Shoots (View Set Pics).

"Jagannath Nivangune is fine and is on the road to recovery. As of now, the shoot of the show has been stopped for the past two days," a source close to the show revealed to IWMBuzz. Sony TV’s Mere Sai Makers To Resume Shoot Post 3-Day Halt After Crew Member Tests Positive For COVID-19.

The production house, Sobo Films, released a statement published by the portal, that reads, "We have always strived to create an environment which is extremely conducive, creative and above all, safe and secure. Considering the pandemic, safeguarding the health of all the people working within our Production Ecosystem, directly or indirectly, has become even more critical."

It further reads, "While all the necessary precautions were taken across all our sets covering important aspects like hygiene, sanitation, and risk mitigation in line with the guidelines advised by the Government of Maharashtra, it is extremely unfortunate that a member of our crew has contracted the virus. We have directly referred the concerned member to competent medical authorities for immediate treatment and care."

"We are in the process of tracing people who may have had direct contact with him and helping all artists, crew members and staff with all necessary medical facilities, recommending them to immediately self-isolate in the event that they exhibit any of the symptoms associated with the virus. All precautionary measures have been implemented at the sets, and as per government guidelines, the set will be non-operational for a period of three days for complete sanitization," it concludes.

(The above story first appeared on LatestLY on Jul 07, 2020 10:00 AM IST. For more news and updates on politics, world, sports, entertainment and lifestyle, log on to our website latestly.com).