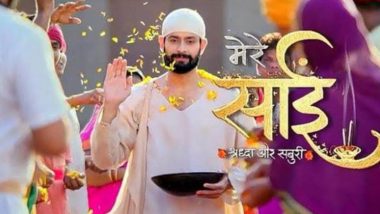 While shoots of a majority of television shows resumed back in June itself, the sets of Sony TV’s Mere Sai were cordoned off and the shoot was cancelled a few days back when one of the creatives present on the sets, tested positive for COVID-19. However, it has been reported that the crew member in question had stopped reporting to work as soon as he fell ill, thus preventing the spread of the virus on sets. The shoot was called off for 3 days and after the set was cleaned and sanitised thoroughly, the team will resume work from July 7. TV Actress Chahat Pandey Injured with Pieces of Glass While Walking Barefoot.

Mere Sai producer Nitin Vaidya told TOI, "Yes, a crew member had tested positive but he did not come to the set. He was feeling feverish four days back and did not report on the sets. He consulted a doctor and his reports tested COVID-19 positive, so he was quarantined. He is recovering well. While all the necessary precautions have been undertaken, as per the guidelines, the set has been thoroughly fumigated and disinfected.” Ishq Subhan Allah Lead Actor Adnan Khan Tests Negative For COVID-19; Assures Everyone He Is Fine.

He continued, “The cast and crew associated with the show are healthy and haven’t come in contact with the person affected. We are happy that we work with a responsible crew who understand the sensitivity of the pandemic and our only intention is to support them in the best possible manner. According to state government rules, we took a halt of three days and we will resume shooting tomorrow."

Just like a majority of other television shows, Mere Sai makers too are in the process of creating an episode bank to be on the safer side, in case of any further hurdles and hindrance.

(The above story first appeared on LatestLY on Jul 07, 2020 09:24 AM IST. For more news and updates on politics, world, sports, entertainment and lifestyle, log on to our website latestly.com).