Anu Malik Finds Support In Singer Hema Sardesai On Me Too Allegations, She Says 'It Takes Two To Clap'

Hema Sardesai supports Anu Malik who has been accused of improper behaviour towards some singers. She points out that you can't clap with one hand. 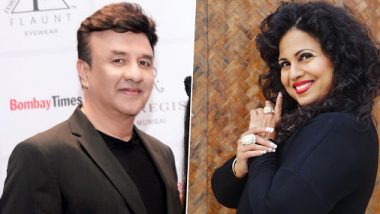 Anu Malik is in the heat of the storm with Me Too allegations. He was removed from Indian Idol last year owing to the reports but in this season of the singing reality show, he was reinstated. That obviously didn't go down well with many including Sona Mohapatra. She wrote an open letter to Sony when Malik was included again in the judges panel for the reality show. Neha Bhasin too shared her harrowing experience with Anu Malik. The channel apparently has now decided to drop Malik again but there is someone who is supporting him. Hema Sardesai, the singer who sang memorable numbers like Awara Bhawre, Jungle hai aadhi raat hai, has written a long post in favour of the composer saying you need both hands to clap. #MeToo: Sona Mohapatra Slams Sony Television for Retaining Anu Malik as the Judge of Indian Idol 11

In the note, Hema reveals that she refused to compromise for work but she wants to know where were these people standing against Malik when she was struggling. She wants to know about all those singers who got big hits via Malik in their career and why are they not supporting him.

Before you feel, Hema is doing all this to get work, she has answered that for you too. She mentions in post that it is a selfless note!

(The above story first appeared on LatestLY on Nov 06, 2019 10:36 AM IST. For more news and updates on politics, world, sports, entertainment and lifestyle, log on to our website latestly.com).