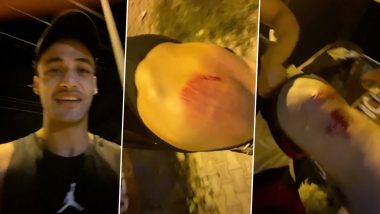 In an unfortunate incident, model and Bigg Boss 13 hottie and runner up Asim Riaz was attacked on the night of August 5, 2020, while cycling near his neighbourhood in his hometown Jammu. Asim became a household name following his stint in Bigg Boss 13 where he was the runner up of the controversial reality show. Not only was the Jammu lad known for his good looks and his Smokin hot bod, but he was also well-liked for his dressing style and also for his constant fight with the season's winner Sidharth Shukla and Paras Chhabra. Bigg Boss 13’s Asim Riaz Buys His ‘Dream Car’, Shares Pictures of the Fancy Four-Wheeler on Instagram!.

Asim, post the attack on him, took to Instagram to reveal about the incident. He revealed, "I was cycling right now and some guys coming in on a bike, hit me from behind, not from the front. They don't have so much fucking...." Asim Riaz: 'Back in 2016-17, Had No Money to Hire a Taxi, Today, I'm Sitting in a BMW Because I Never Gave Up'.

Bad news for #asimriaz fans. He was attacked by someone while he was cycling. Dont know who they were and what was their motive 💔

Showing the injuries he suffered on his back, left shoulder, calf, knee and even scratch marks on his thigh, Asim reassured his fans that "everything is cool I still don't give up." Well, Asim has definitely taken the attack in a sporting manner, revealing that he won't give up. As soon as the video was posted, Asim's fan army began showering blessings of speedy recovery on their idol. Bigg Boss 13’s Asim Riaz Turns A Year Older Today! Fans Trend #HBDAsimRiaz On Twitter On His 27th Birthday (View Tweets).

Asim is also well-known for his love story with Himanshi Khurana inside the BB13 house. While Himanshi, who was one of the first wildcard entrants to enter the house was engaged at that time, Asim fell head-over-heels for her and things eventually worked out in his favour. For when Himanshi re-entered the house to support him, she had broken up with her fiance and expressed her feeling for him. Ever since, AsiManshi has been painting Instagram with the colour of love. We wish Asim a speedy recovery.

(The above story first appeared on LatestLY on Aug 06, 2020 08:21 AM IST. For more news and updates on politics, world, sports, entertainment and lifestyle, log on to our website latestly.com).