Avrodh The Siege Within Review: Amit Sadh’s Web-Series on the 2016 Surgical Strike is an Impressive Watch 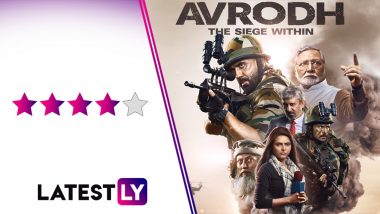 Avrodh The Siege Within Review: We have already witnessed Aditya Dhar's 2019 blockbuster hit Uri: The Surgical Strike. which celebrated the valour of the Indian armed forces taking down POK-based terrorist camps after the 2016 Uri attack. While the Vicky Kaushal film was high on josh, Avrodh - The Siege Within, the new web-series, directed by Raj Acharya, on  SonyLIV, brings us a detailed insight about the whole operation and touches the topic politically by exploring in-depth one of the biggest retaliations in the history of Indian Army. Avrodh – The Siege Within Trailer: Amit Sadh’s Thrilling Web Series Attempts to Reveal the Real Story Behind Uri Surgical Strike (Watch Video).

The series is based on a chapter in in Rahul Singh and Shiv Aroor’s book, India’s Most Fearless. The best thing about Avrodh The Siege Within is that it makes for a riveting watch for many more reasons. Avrodh The Siege Within begins by taking us straightaway to the Uri base camp in 2016 and showcases how the terror outfit initiates their attack that killed 17 of our soldiers.

Right after the aftermath of the URI attack, NIA takes over the internal investigation and the government of India extends their full support to the armed forces with rigorous meetings and discussions by planning a befitting reply for this back-stabbing incident. A political overview of the situation of that time is well-displayed considering the fact India didn't take part in the SAARC summit. The show has some exquisite locations of the Kashmir valley and capturing the bigger picture which the director does would primarily satisfy the audiences.

Avrodh The Siege Within Trailer

Cinematography by Shanu Singh Rajput is commendable and the on-field action sequences are shot well. The chase sequences in the valley is a delight to watch and the background score suits well. I particularly loved the show's writing as it touched some crucial topics like fake currency nexus, the separatists talking with Jaish's chief and ISI uniting Hijbul-Mujadeen and Jaish for their purpose of eradicating Indian Army from Kashmir. Brainwashing innocent lives in the name of jihad is shown in a vocal way. Overall Avrodh is a binge-worthy series which you might prefer watching it at one go, all the credits go to its treatment and a stellar cast putting up a good show. Avrodh: The Siege Within - Amit Sadh Reveals the Sony LIV Show Brought Back His Childhood Memories Being from an Army Family.

The series has a great cast and everyone gets into their given character flawlessly. Amit Sadh makes for a charming military man as he plays Major Videep, the paramilitary force commando who heads the retaliation operations on Jaish's terrorist camp in the Pakistani occupied Kashmir. Although Sadh's entry is at the end of the 4th episode which is neither late nor too early. Darshan Kumaar, playing an impressively moustached Major Gautam, is spot on.

Ananth Narayan Mahadevan plays a security consultant, an ideal person with self-doubt raising the right questions understanding the repercussions of every situation. Anil George who had a cameo in URI: The Surgical Strike, now gets a full-fledged role of Jaish-e-Mohammed head and he plays the character convincingly.

Vikram Gokhale as PM Narendra Modi was the best casting. He was convincing as the Prime Minister of India in every frame. Neeraj Kabi as a cool-headed NSA is yet another notable performer in the show. Arif Zakaria as the NIA investigating officer did a great job too. Anil George as antagonist steals the show.

- Writing and Execution Is The Winner

- Night Sequences on-ground are too dark at places.

(The above story first appeared on LatestLY on Jul 30, 2020 11:01 AM IST. For more news and updates on politics, world, sports, entertainment and lifestyle, log on to our website latestly.com).