Khanna will be seen in the show motivating Babita (actress Paridhi Sharma) and talking about women empowerment, read a statement from Sony Entertainment Television. 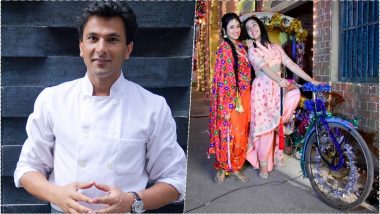 Mumbai, March 30: Popular chef Vikas Khanna will make a special appearance during Baisakhi celebration on the fiction show Patiala Babes. The show is based on the relationship between a mother and her daughter. Soon, the story will take an interesting turn by showcasing how a homemaker turns entrepreneur. Yeh Rishta Kya Kehlata Hai Star Ashnoor Kaur aka Naira Goes Badtameez In A Party: Watch Exclusive Video!

Khanna will be seen in the show motivating Babita (actress Paridhi Sharma) and talking about women empowerment, read a statement from Sony Entertainment Television. "The makers of Patiala Babes are narrating a beautiful story of Babes and Mini. I am doing a cameo role. I will be playing myself," Khanna said in a statement.

"We will be celebrating Baisakhi on the show where I will be coming to encourage Babes to take the next big step in her life. TV has been a very important part of my life and I am happy to return," added the former judge of MasterChef India.

(The above story first appeared on LatestLY on Mar 30, 2019 12:55 PM IST. For more news and updates on politics, world, sports, entertainment and lifestyle, log on to our website latestly.com).