Bigg Boss 13's power couple, Asim Riaz and Himanshi Khurana are serving couple goals as the two look elegant in their recent photoshoot for a magazine. Check it out! 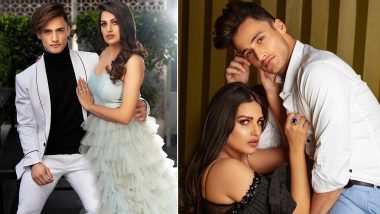 Bigg Boss 13 this year saw many love stories blooming on national TV. Be it Sidharth Shukla-Shehnaaz Gill, Paras Chhabra-Mahira Sharma or Asim Riaz-Himanshi Khurana, all of them made headlines for their cutesy pyaar on the show. However, after the reality series, it was only Asim and Himanshi who came out in open and accepted that they are seeing each other. But their togetherness was not well received by a section of people online and the two were heavily criticised. Even after so much of hate, the lovebirds stayed strong and are glued with one another. The pair recently posed for a magazine and the result is beautiful. Yep, you read that right! Bigg Boss 13's Power Couple Himanshi Khurana and Asim Riaz Look Fashionably Hot as They Grace A Magazine Cover (View Pic).

Asim shared two pictures on his Instagram which sees him with his ladylove Himanshi, courtesy Fitlook mag! Elaborating on the photos, in the first one, we can see Asim looking all crisp in a pair of white blazer and pants which he has teamed it with a turtle neck black t-shirt underneath. On the other hand, Khurana is seen donning a ruffles dress, looking stunning. In another pic, Asim is seen opting for a white shirt along with blue pants whereas the babe is all decked up in a black dress. Have Himanshi Khurana and Asim Riaz Called It Quits? Punjabi Actress' Latest Tweet Gets All AsiManshi Fans Worried.

Scroll Through AsiManshi's Pictures Below:

The above photoshoot sees AsiManshi at their style best! Meanwhile, some days back, Himanshi created quite a stir online by posting a cryptic tweet which hinted that she is no more with the BB 13 runner-up. Fortunately, the model-turned-actor was quick enough to clear the air. FYI, the Fitlook magazine shoot happens to be the pair's second project together as earlier they were seen in Kalla Sohna Nai song. Stay tuned!

(The above story first appeared on LatestLY on Apr 15, 2020 05:39 PM IST. For more news and updates on politics, world, sports, entertainment and lifestyle, log on to our website latestly.com).