Bigg Boss decides to surprise Jasmin Bhasin as her parents enter. An ecstatic Jasmin, who has been asked to freeze, rushes to them the moment she is released. Her parents, too, are thrilled to meet their daughter. They also have advice for her. 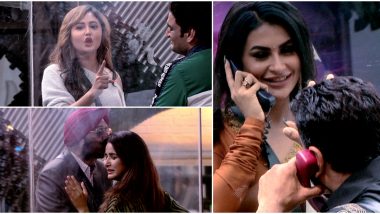 Its Family Week in Bigg Boss 14 and the housemates are all extremely excited about who will show up for them. In his trademark style, Bigg Boss asks the gathered housemates to freeze as their loved ones enter the house. When Bigg Boss releases them is when they can go and interact with them. This time, Bigg Boss decides to surprise Jasmin Bhasin as her parents enter. An ecstatic Jasmin, who has been asked to freeze, rushes to them the moment she is released. Her parents, too, are thrilled to meet their daughter. They also have advice for her. Bigg Boss 14 January 08 Synopsis: Rakhi Sawant Is Inconsolible After Finding Out That Her Mother Is Hospitalised.

They ask Jasmin to play a solo game and establish herself. It’s evident that they are hinting about her closeness with Aly Goni. While Jasmin tries to explain to her parents about her bond, her mom and dad are sure that she is making a mistake being with Aly! Vikas Gupta, who has been rather unhappy and feels that no one is going to show up for him in the family week is pleasantly surprised when his friend Rashami Desai shows up! Vikas is overjoyed on seeing Rashami and the two hug it out through the screen. Rashami has some good advice for Vikas. She tells him to not pay any heed when the housemates blame him for things that happened on the outside. Bigg Boss 14 Weekend Ka Vaar Preview: Eijaz Khan Proposes Pavitra Punia to Spend the Rest of their Lives Together, the Actress Seals the Deal With a Kiss.

She also reminds him that it is the public who have given him the tag as mastermind. She asks him to love himself and to not give in to despair. She also asks Aly and Jasmin to stop Bullying Vikas. She asks the housemates to not corner him and to not speak about his family. Seeing this kind of fierce support, Vikas is speechless and extremely thankful!

Bigg Boss also has a very special surprise in store for Eijaz Khan as well. Having yearned to meet Pavitra Punia for so long, Eijaz's happiness knows no bounds when he hears Pavitra calling him 'Khan Sahab' and he immediately rushes outside to see her. They open their hearts out and express their love for each other. Signing off, Pavitra says that she has already won her trophy hinting towards Eijaz. Will Jasmin heed her parents’ advice and maintain distance from Aly? How will Vikas Gupta bounce back after that show of support from Rashami?

(The above story first appeared on LatestLY on Jan 09, 2021 05:43 PM IST. For more news and updates on politics, world, sports, entertainment and lifestyle, log on to our website latestly.com).