Amidst all the ugly fights, Bigg Boss 14 has suddenly taken a romantic turn. Actor Abhinav Shukla, the husband of actress Rubina Dilaik, has become the apple of Rakhi Sawant and Arshi Khan's eyes. 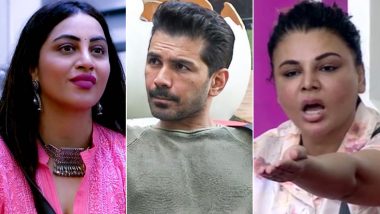 Amidst all the ugly fights, Bigg Boss 14 has suddenly taken a romantic turn. Actor Abhinav Shukla, the husband of actress Rubina Dilaik, has become the apple of Rakhi Sawant and Arshi Khan's eyes. Undoubtedly, Abhinav has been one of the more popular men in the house this season. From being a helping hand in the kitchen to being the macho man flaunting his chiselled body by roaming around shirtless in the house and showcasing his chivalrous side to housemates, Abhinav has crafted a positive image. He is quite the "ladies's man" in the show. Bigg Boss 14: Rubina Dilaik, Eijaz Khan, Aly Goni and Others Break Down After Meeting Their Families (Watch Video)

The outcome has been mushy. Despite Rubina's presence, no sooner did she enter the house Arshi Khan professed love for Abhinav. She was seen making comments like "tum mere ho" (you are mine), "I will destroy you" and "I can even make you papa". Arshi was also heard saying: "Abhinav is mine. Even if Rubina fights with me and asks me to look into her eyes, I am ready to do that but Abhinav is mine." She openly flirted with Abhinav before Rubina, and also went to the extent of talking about the "gharwali" and "baaharwali". Bigg Boss 14: Shilpa Shinde Gets Annoyed With Vikas Gupta for Dragging Her Name on the Reality Show

Now, even Rakhi Sawant is in the mood to chase Abhinav. While speaking in the confession room, Rakhi has revealed the truth about her "mystery" husband and marriage. She has then gone on to confess her feelings for Abhinav, saying she wants to be his girlfriend and steal him from Rubina. Rakhi seemed quite impressed with his knowledge, his well-built physique and behaviour. Rakhi was also seen asking about Rubina and Abhinav's marital status.

She was later seen flirting with him during the day and dedicating the number "Kaante nahi katte yeh di yeh raat" from "Mr India" to Abhinav. Seeing Rubina and Abhinav, Rakhi was seen speaking to housemate Vikas Gupta. She said she hopes the couple stays together and if it does not happen, she would take Abhinav.

Rakhi had quipped: "But agar alag ho gaye to main to Abhinav ko pakad lungi (if they separate then I will take Abhinav)." Moot question: Going by the fact that Bigg Boss is a hotspot of dirt tricks, are Rakhi and Arshi merely trying to trigger off a major fight between Abhinav and Rubina, knowing well that such a scenario would disturb the couple's game plans.

(The above story first appeared on LatestLY on Jan 08, 2021 12:39 PM IST. For more news and updates on politics, world, sports, entertainment and lifestyle, log on to our website latestly.com).