Will Rahul be able to withstand the questioning from the housemates? How will the final days of the finale weekend pan out? 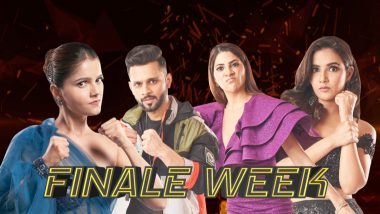 With the Finale approaching and the threat of evictions looming large, all contestants in the Bigg Boss 14 House are walking a very fine line. The only options are to play the A-game or get booted out! Eijaz Khan and Rahul Vaidya scrape their old wounds and their rivalry takes on a new angle. The two are seen locking horns in the kitchen as their casual conversation turns into an epic battle! Bigg Boss 14 December 03 Episode: Rubina Dilaik Explodes On Housemates, Abhinav Shukla Becomes the Second Finalist After Eijaz Khan - 4 Highlights From BB14.

When Bigg Boss announces the nominations this week, it seems like the entire house is targeting Rahul! Bigg Boss provides the housemates a punching bag in the confession room, where they have to stick the faces of the contestants they want to evict and punch it hard! First up is Nikki Tamboli, who feels that Rahul is vacationing in the Bigg Boss house and he deserves to be thrown out. Rahul, meanwhile, nominates Nikki for hurting other contestants’ emotions. Both Abhinav Shukla and Rubina Dilaik also nominate Rahul. It is Eijaz, however, who plays a different card and nominates Jasmin Bhasin, who cannot believe his words! Bigg Boss 14 Preview: Eijaz Khan Nominates Jasmin Bhasin, Calls Her Irritating and Undeserving to Enter the Finale Week (Watch Video).

This time, Rahul’s behaviour towards Rubina and Nikki is something that the housemates are targeting him for. While Rubina tries to make the argument about Rahul not respecting women, Rahul says that he is behaving with them with the way they deserve. Cornered from all sides, Rahul still seems to be unfazed as he tackles all the hearsays that the housemates are seen throwing at him! Will Rahul be able to withstand the questioning from the housemates? How will the final days of the finale weekend pan out?

(The above story first appeared on LatestLY on Dec 04, 2020 06:35 PM IST. For more news and updates on politics, world, sports, entertainment and lifestyle, log on to our website latestly.com).