Bigg Boss 14: Jasmin Bhasin's Rumoured Ex, Suraj Wadhwa Denies Ever Being in Relationship with the Actress, Says They Were Just Good Friends

"No, Jasmin and I were not dating each other. We were just good friends," said Suraj Wadhwa in his recent interaction. 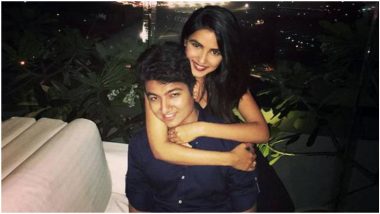 Is Jasmin Bhasin trying to be the next Shehnaaz Gill of Bigg Boss 14? We don't know but we're pretty intrigued by her act inside the house. The actress who's currently rumoured to be in a relationship with TV hunk Aly Goni was apparently dating Suraj Wadhwa before they parted ways. Though she never made her relationship official with the production house owner, there was a strong buzz suggesting their affair. Now, when E Times tried to get in touch with her former beau, he vehemently denied any such news and insisted on them being just good friends. Jasmin Bhasin Reacts To Rashami Desai Replacing Her As Nayantara on Naagin 4.

"No, Jasmin and I were not dating each other. We were just good friends. We are still friends but not that much in touch. You are close to some friends for only a certain period of time," said Suraj when asked if he was ever dating the television beauty. Ask him if he knew she was entering the BB house and he denied saying, "We speak only on and off." The boy however is rooting for his "good friend" to win the show. "I hope she wins. But I haven't seen any episode this season yet," he said when asked if he thinks she'll lift the trophy this year. Jasmin Bhasin On Aly Goni Link Up Rumours: ‘Earlier, I Would Laugh Them Off But Now, They Have Started To Affect Me’.

Going further, Suraj continued praising Jasmin by saying, "She's a sweet girl. She doesn't pick up fights and is not argumentative either, from as long as I know her. She's very straightforward as a person. So, she's a fighter in that sense. If these skills are needed, I am sure she will go all out and put her best foot forward."

We wonder if Jasmin will agree with his take or if she'll have a different tale to tell.

(The above story first appeared on LatestLY on Oct 13, 2020 06:49 PM IST. For more news and updates on politics, world, sports, entertainment and lifestyle, log on to our website latestly.com).