Bigg Boss 14 finale is next week and so contestants on the show are in no mood to calm down. Going by tonight's preview, we see a huge fight erupting between Jasmin and Eijaz. We also see Rubina Dilaik trying her best to win in the 'Shark Attack' task. Check it out. 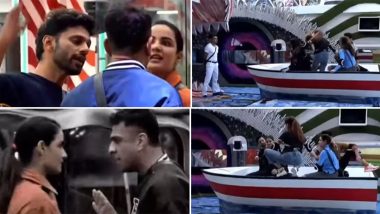 What the F*ck is happening on Bigg Boss 14. As after the host of the show Salman Khan revealed that finale is going to take place next week, contestants have lost their mind and are losing their cool. If Aly Goni’s eviction and Kavita Kaushik’s voluntary exit from the reality show was not enough, tonight’s (Dec 03) episode gets spicier. As going by the preview, it is going to be Eijaz Khan vs Jasmin Bhasin. As the old enemies will be seen locking horns once again. All this will happen due to the ongoing ‘Shark Attack’ task where after getting constantly poked by Jasmin, Eijaz will react. Bigg Boss 14 December 02 Episode: Jasmin Bhasin Has A Breakdown, Rubina Dilaik and Kavita Kaushik's Showdown Leads To the Latter Walking Out - 6 Highlights Of BB14.

In the precap, we see Eijaz coming too close to Jasmin’s face and arguing. To this Bhasin reciprocates by saying that she does not fear this man anymore. Well, trust us we have never seen Eijaz this angry on the show. Cut straight to the task, we see Rubina Dilaik trying her best to snatch a chair from the already seated contestants. She yells into Rahul’s ears and also threatens all to paint their faces. Bigg Boss 14: Rahul Vaidya’s Mother Geeta Lashes Out At Rubina Dilaik and Abhinav Shukla, Says Their Plans To Malign Her Son Have Failed.

Ghosh seems like, after being crowned as the most boring season ever, the makers are trying way too hard to increase TRPs of BB 14. Also, it’ll interestingly to see who among the contestants will win the finale week task and be the second finalist after Eijaz. Reportedly, the winner is Abhinav Shukla. Stay tuned!

(The above story first appeared on LatestLY on Dec 03, 2020 02:09 PM IST. For more news and updates on politics, world, sports, entertainment and lifestyle, log on to our website latestly.com).