Bigg Boss 14 is surely getting dramatic as well as entertaining with each passing day. Sunday’s Weekend Ka Vaar with Salman Khan was continued on Monday’s (Oct 19) episode as Somvaar Ka Vaar and boy it was a fun day. Read on. 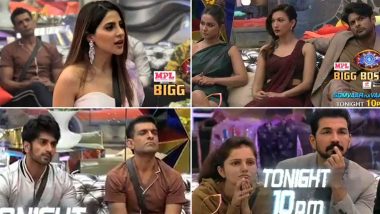 Bigg Boss 14 is surely getting dramatic as well as entertaining with each passing day. Sunday’s Weekend Ka Vaar with Salman Khan was continued on Monday’s (Oct 19) episode as Somvaar Ka Vaar and boy it was a fun day. Host Salman Khan was all up to add spice and quizzed mentors as well as the freshers to choose one inmate from the bottom three (Shehzad Deol, Abhinav Shukla, Jaan Kumar Sanu) who they think should get evicted this week. However, no one gets eliminated from the house today, but as said by the host, one will be eliminated in the coming days for sure. In case you have missed tonight’s Bigg Boss episode, check out the highlights below. Bigg Boss 14 Weekend Ka Vaar October 18: From Salman Khan's Lecture To Rubina Dilaik to Shehzad Deol, Abhinav Shukla and Jaan Kumar Sanu in Bottom 3 - 5 Highlights of BB14.

First things first, Salman Khan asks all the contestants as well as the mentors to select one from the bottom three inmates who they think should leave the reality show. The votes keep on coming. The number of votes stands at: Abhinav with 4 votes, Shehzad with 4 votes and Jaan Kumar Sanu with 4 votes. Then comes the ultimate moment when Sidharth Shukla's vote becomes the deciding factor. Shukla picks Deol. However, this was just a game and was not a real elimination. But as a saza, Shehzad needs to be an invisible man in the house now.

Another task which we saw today was where every fresher had to pick one contestant who they think is not made for the show or is least deserving. However, the twist here was that while choosing a contestant, one needs to spray foam on another. It’s foaming insult. Rubina sprays on Rahul Vaidya, Jasmin Bhasin targets Eijaz Khan, Nikki sprays foam on Abhinav Shukla. But as Abhinav irks Tamboli by saying ‘jaldi spray kar’, it makes her angry and she makes him all white. Bigg Boss 14 October 17 Episode: Rahul and Jaan's Sing-Off, Hina Calls Rubina a Winner - 5 Highlights of BB 14.

Salman Khan pulls Punia's leg by telling her she ain't happy with any man in the house as according to her none are good-looking. To this, she does not agree but her smile says it all. The host jokes with all that we have a new wild contestant just for Pavitra and tells Nikki to get him. And well it is nothing but a many male mannequin. Hahaha! Bigg Boss 14: Manu Punjabi Unmasks Rubina Dilaik and Abhinav Shukla’s Lie of Not Following the Reality Show’s Previous Seasons With Proof (Watch Video).

It so happens that host Salman Khan gives a task to the toofani seniors where they need to pick one of the two contestants who according to them is less entertaining. The first two in the game were Rubina vs Eijaz where Hina Khan picks Rubina and Sidharth Shukla being himself calls Dilaik ‘selectively dumb’ and declares Eijaz more entertaining than her.  To which, Rubina looks puzzled. However, at last as per the seniors overall votes, it's Rubina, Pavitra, Abhinav and Jaan who they think are entertaining than others.

In a shocking twist, Salman Khan throws another bomb and tells the inmate that they now need to select one out of the three mentors and be part of his/her team. Hina's team includes Nishant, Abhinav, Rubina, Jasmin. Gauahar's team includes Jaan and Rahul. Sidharth's team include Nikki, Pavitra and Eijaz.

This was it, guys! Somvaar Ka Vaar was indeed fun, filled with revelations and we also saw some equations changing in the house. The upcoming episode surely looks more impactful and we can't wait for it. Stay tuned!

(The above story first appeared on LatestLY on Oct 19, 2020 11:54 PM IST. For more news and updates on politics, world, sports, entertainment and lifestyle, log on to our website latestly.com).