In tonight's episode, when he notices that Nikki Tamboli refuses to make Rakhi Sawant’s bed as a duty assigned to her, he is most unpleased. He asks Nikki why is she refusing to make Rakhi’s bed? When Nikki does not give in, Salman Khan himself enters the house to make Rakhi’s bed! 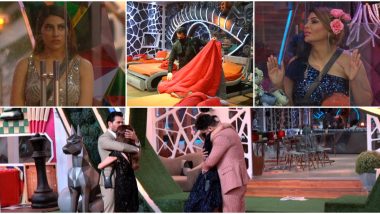 Weekend Ka Vaar episodes are among the most dramatic ones in the entire week in Bigg Boss 14. While unpredictable tasks are always something that Bigg Boss launches, the master host Salman Khan, too, takes the reigns in his hands to set things alright in the house! This time, the housemates are asked to step forward and name their co-contestants who have tried to show them in a bad light in Bigg Boss. Bigg Boss 14: Salman Khan Cries While Announcing this Week's Eviction, Was It Jasmin Bhasin or Abhinav Shukla's Elimination that Left Him In Tears? (Watch Video).

First up is Arshi Khan, who takes Abhinav Shukla’s name for spoiling her image. Rubina Dilaik is next, who feels that housemates are blaming her for having a superiority complex. Eijaz Khan and Rahul Vaidya argue with her while Rubina says that they are building a false narrative. As Rahul goes up, he names Rubina as someone who is making him out to be a person who does not respect women. Bigg Boss 14: Jasmin Bhasin Eliminated From Salman Khan’s Reality Show - Reports.

Jasmin Bhasin also blames Rubina as someone who has spoken ill, not just about her, but other housemates as well. Rakhi Sawant claims that Rahul and Nikki Tamboli are badmouthing her. Aly Goni, on the other hand, says that Vikas Gupta is making him out to be a bully. Vikas, on his part, argues that Aly is someone who only knows to provoke people. When it is Eijaz Khan’s turn, he calls out Rubina as someone who has tried to ruin his image. Her hubby Abhinav takes offense to it and the two get into a heated war of words!

Nikki is visibly shocked and embarrassed as are the other housemates. Salman cleans the entire bed, changes the pillowcases, and leaves with one piece of advice, ‘No work is big or small!’ In a shocking turn, Aly, Jasmin, Abhinav, and Rubina find themselves at the bottom it's one of them who will bid adieu to the show tonight. A wave of emotion hits everyone as the four contestants wait for the name to be announced and are in tears.

(The above story first appeared on LatestLY on Jan 10, 2021 06:43 PM IST. For more news and updates on politics, world, sports, entertainment and lifestyle, log on to our website latestly.com).