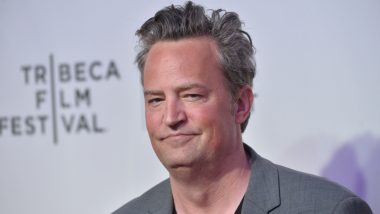 Ben Winston, the director of the 'Friends' reunion special denied speculations about actor Matthew Perry's bad health and said it was 'a great experience working with him'. Ben, who pitched the idea for a 'Friends' reunion special to the show's six stars after re-watching the series, spoke out about comments fans have made about Matthew's appearance in the special episode. Matthew portrayed Chandler Bing on the beloved American sitcom. He has always been vocal about his battle with mental health issues and substance abuse, which has also sometimes been reflected in his appearance on 'Friends'. FRIENDS The Reunion: 7 Best Moments From the Special Episode That Brought FRIENDS Together After 17 Years (LatestLY Exclusive).

Rubbishing the speculations, Ben said that currently, Matthew is not struggling with any health issues. "He was great! People can sometimes just be unkind. I wish they weren't. I loved working with him. He's a brilliantly funny man and I thought he had some great one-liners in the show. I felt just happy and lucky to be in his presence and directing him on something like this," Ben said on The Hollywood Reporter's podcast TV's Top Five. FRIENDS the Reunion Review: Nostalgic, Heartbreaking, Touching and Somewhat Stretched, ‘The One Where It All Comes Back’! (LatestLY Exclusive).

'Friends' producer Kevin S. Bright also amplified Ben's statement in an interview with The Hollywood Reporter saying, "What people say is what people say. I don't have any to say about that, except it was great to see him. And I think he's very funny on the show. But yes, I think he's OK. He seems stronger and better since the last time I saw him, and excited about going forward."

Recently, Matthew joined Courteney Cox, David Schwimmer, Jennifer Aniston, Lisa Kudrow and Matt LeBlanc for 'Friends: The Reunion' on HBO Max.'Friends' originally aired for 10 seasons on NBC from 1994 to 2004. The beloved sitcom followed the story of six friends in their 20s and 30s who live in Manhattan, New York City.