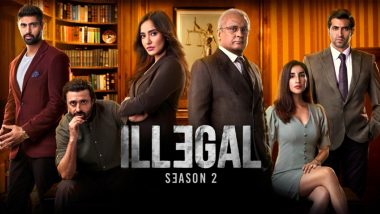 The synopsis of the web show reads, "It revolves around Niharika Singh who is a lawyer and is hired by a renowned law firm which is run by Janardhan Jaitley. Throughout the series, Niharika makes several shocking revelations. She is forced to work on other cases as supposed on the one she was hired for which revolved around rape and sexual harassment charges." Illegal 2 Teaser: Neha Sharma, Piyush Mishra’s Legal Series Promises More Nail-Biting Drama (Watch Video).

Check Out What Critics Have To Say About The Series:

Times of India: "Director Ashwini Chaudhary doesn't waste time in getting to the point.  In keeping with the series ' core idea , he begins the second season with Niharika's legal wrangle with Akshay Jaitley ( Akshay Oberoi ), her ex boyfriend and also the son of her former mentor Janardhan Jaitley .  Their film Jaitley & Associates have filed a complaint against Niharika for professional wrongdoings, but luckily she manages to get away with a warning.  Meanwhile, Janardhan, who's been nominated for the Rajya Sabha, is aspiring to take over from Mrinalini Singh (Achint Kaur) and become the Chief Minister of New Delhi.  At the same time, he's getting more venomous and vindictive in sparing no effort in scaring his former protégée out of the legal circuit."

Tellychakkar: "The story of this fresh new season once again deals with Niharika Singh played by Neha Sharma who is also known as the mad lawyer, who is now more fearless and can do anything for the right things. This is the ultimate battle between Niharika Singh and Janardhan Jaitley which is played by Piyush Mishra. How Janardhan Jaitley in the entire series tries to pull down Niharika Singh is something amazingly show on in the show with the backdrop of the ongoing cases, and how  this face off takes turns is something amazing to see. The screenplay of the show is very gripping, right from the very first seen the storytelling will engage you and manages to keep you hooked and booked to your seats also the direction given by Ashwani Chaudhary is decent."

IANS: "Set in the underbelly of the legal system with lawyers, police, politicians, criminals, and victims, 'Illegal 2', streaming on Voot Select, is an engrossing drama that crusades on exposing the atrocities taking place in its universe. It deals smartly and candidly with issues of power, how business really gets done in our legal and political systems, and the trade-offs we all make just to get through the day. Taking off soon after Season 1, the once budding lawyer Niharika (Neha Sharma) has become a force to reckon with. Joining hands with the Public Prosecutor she is pitched against Janardhan Jaitley (Piyush Mishra), her once mentor and now a politician who is aspiring to be the Chief Minister."

We from LatestLY have also watched the series and it's a worth watch for sure, "Illegal season 2 does start off on a dicey note, as if it was unsure how to rearrange the chess pieces on the board after the shakeup of the last season's finale. But once it gets the game going, there is no turning back. JJ's sly plays, the mystery around Nihaarika's Damocles sword hanging on her head, not to mention her new complicated cases, manage to keep you arrested to the very end. The courtroom sequences are well-done and packs a punch when needed. Ashwini Chaudhry brings a razor-sharp edge to the proceedings, that along with the decent pacing, makes the episodes worthwhile."

However, with the above reviews it can be said that the web show has got quite positive reactions from the critics. Considering the cast and the previous season, the series surely promises some high power legal steps and actions in season 2. Illegal Season 2 is currently streaming on Voot Select.

(The above story first appeared on LatestLY on Nov 26, 2021 11:22 PM IST. For more news and updates on politics, world, sports, entertainment and lifestyle, log on to our website latestly.com).